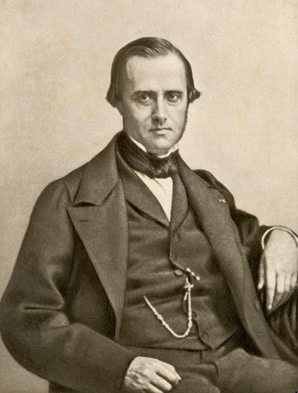 Édouard Albert Roche (October 17, 1820 to April 27, 1883).  Édouard Roche was a French astronomer and mathematician best known for his theory of the origin of Saturn’s rings and his contributions to celestial mechanics, including the important concepts now named for him: “Roche lobe”, “Roche limit”, and “Roche sphere.”

Roche was born in Montpellier, France, in 1820.  He received his doctorate from the University of Montpellier in 1844, and five years later became a professor in the Faculty of Sciences there. Much of his research concerned orbital mechanics of stars, planets, moons and comets.  He showed that a celestial body that is held together only by gravity and is in orbit around a more massive central body will be disintegrated by tidal forces if it is too close to the central body, and in particular if its distance from it is less than what is now called the “Roche limit” or “Roche radius.”  Because planets and moons usually  form from the gravitational coalescence of smaller bits of matter, they generally form only outside the Roche distance from the central body.  Inside the Roche limit, such bits of matter generally disperse to form rings like those of Saturn.

Roche also studied the effective gravitational field produced by two bodies of comparable mass in orbit around each other, i.e. a “binary system” such as a “binary star.”   He showed that there is a region near each body, called its “Roche lobe,” within which objects would be gravitationally bound to that body — effectively, its region of gravitational dominance.  The Roche lobes of the two bodies in a binary system touch at a point called the “first Lagrange point” (or “L1”). Sometimes a star is large enough that some of its outer material extends past L1 into the Roche lobe of its partner, causing that material to accrete onto the other body.  This is referred to as “mass transfer” though “Roche lobe overflow.”  This is the cause of many interesting and much studied astronomical phenomena, such as “X-ray binaries” and “millisecond pulsars.”

Roche was a life-long and devout Catholic believer.  In his obituary for Roche, the famous scientist Boussinesq wrote,

“Death did not surprise him. For a long time he had found, in the exercise of the Christian virtues and in the religious practices of a simple faith, all the consolations attached to the hope of a better life and of a more complete light than that which both rejoices and disturbs our wavering reason here below. There he drew the strength to endure with resignation the sufferings of the obstinate cough which was gradually exhausting him. Provided with the last rites of the Church, he saw without faltering the approach of his supreme hour. All his life, moreover, he had not only obelieved in that God who is the reason of things and ordering intelligence, which we discover at the bottom of science as the [explanation of the existence of] intelligible laws in the universe. But rather also, faithful to his family traditions, he had always invoked the good and just God of spiritual philosophy and Christianity, that God who is the strength and guarantee of morality and belief in whom despite the hideous spectacle of evil, and rendered free and meritorious by this very spectacle, is so indispensable to thoughtful souls so as not to fall into a desolating pessimism.”