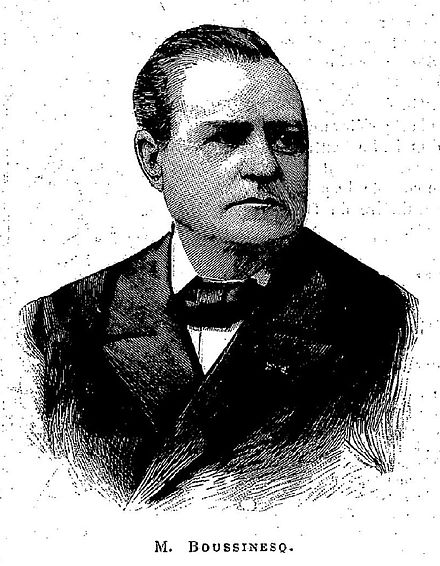 Joseph Valentin Boussinesq (March 13, 1842 to February 19, 1929) Boussinesq was a French mathematician and physicist who made important contributions to the study of fluid dynamics and turbulence that have ramifications in several branches of science. He was largely self-taught and owed much of his early education to his uncle, a priest. In 1872, he was appointed professor in the Faculty of Sciences of Lille, and from 1896 until his retirement was professor of mechanics in the Faculty of Sciences of Paris.  Boussinesq’s first major contribution was to explain a strange wave phenomenon first (and famously) observed in 1834 by a Scottish engineer named John Scott Russell. Russell had seen a water wave propagating for miles in a canal without changing its shape or height.  This is an example of what is now called a “solitary wave” or “soliton,” which in the late 20th century became a subject of great interest to mathematicians and physicists. Boussinesq’s (correct) explanation was based on a set of non-linear differential equations that he derived to describe the propagation of waves in shallow water, which are now referred to as the “Boussinesq equations.”  These equations are the basis of most ocean circulation models, and generalizations of them, called Boussinesq-type equations, are used to describe many other phenomena, such as wave motion near coasts and harbors. Under certain assumptions, the Boussinesq equations reduce to a simpler form, which Boussinesq published in 1877, but which came to be named the “Korteweg-de Vries equation” or “KdV equation” after two scientists who rediscovered it in 1895.  The KdV equation has applications to waves in plasmas, crystals, and many other physical contexts. It is also of great interest to mathematicians as a prime example of an “exactly solvable model” and as an equation with soliton solutions.  In 1897, Boussinesq published his “Theory of the swirling and agitated flow of liquids,” which was a ground-breaking paper in the study of turbulence and hydrodynamics.

Boussinesq was a devout Catholic. He was a leading member of the Scientific Society of Brussels, an organization dedicated to Catholic engagement with modern science, and wrote for its Revue des questions scientifiques. According to one historian, “He was passionately interested in the relevance of science to religion. In conversation he would go out of his way to raise difficult theological problems.”