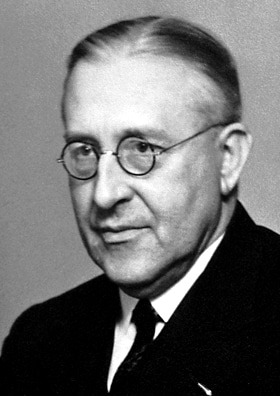 Victor F. Hess (June 24, 1883 to December 17, 1964) Victor Francis Hess was an Austrian-American physicist.  He was awarded the Nobel Prize in Physics in 1936 for discovering cosmic rays, which are subatomic particles of very high energy that impinge on the earth from outer space.  Most cosmic rays come from outside the solar system and some from outside our galaxy.  They primarily consist of protons and alpha particles (4He nuclei), but also of heavier atomic nuclei and electrons. Cosmic rays have energies spanning a vast range, with a few having been detected with energies in excess of 1020 electron-Volts.  (For comparison, particles produced in nuclear reactions typically hav.e energies of order 106 electron-Volts.)  When energetic cosmic ray particles smash into the nuclei of atoms in the earth’s atmsphere, they interact to produce cascades of many charged particles called “air showers,” which also ionize atoms in the atmosphere.  Before Hess did his pioneering work, it was assumed that the ionizing radiation measured in the atmosphere had a terrestrial origin and would thus decrease in intensity at higher altitudes. After improving the devices used to measure such radiation, Hess carried such devices up to altitudes as high as 5.3 km in a series of hazardous balloon flights undertaken in 1911-2 both at night and daytime. He found that the intensity of radiation did indeed decrease with height up to about 1 km, but then strongly increased with altitude, indicating a cosmic origin.  Hess’s discovery inaugurated the fields of Cosmic Ray Physics and Astroparticle Physics. The physicist Carl D. Anderson discovered antimatter, specifically positrons (the anti-electrons predicted by Dirac’s theory of electrons), in cosmic rays in 1932, for which he shared in the 1936 Nobel Prize with Hess.  In 1936, Anderson and his student Seth Neddermeyer discovered muons in cosmic rays, the first particle to be discovered that is not a constituent of ordinary matter.  Today there are many cosmic ray observatories throughout the world, which yield important information about fundamental particles and their interactions as well as about astrophysical phenomena.  In 1938, Hess emigrated from his native Austria to the United States with his Jewish wife to escape Nazi persecution, and took a position as Professor of Physics at Fordham University. He was a devout Catholic, and in 1946 wrote an article, “My Faith”, in which he discussed the relation of science and religion and his own belief in God.