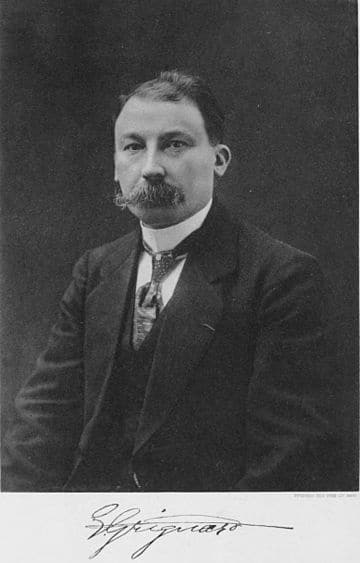 François Auguste Victor Grignard (May 6, 1871 to December 13, 1935) Grignard was a French chemist who shared the Nobel Prize in Chemistry in 1912 for discoveries important in the synthesis of organic molecules.  (The other recipient was Paul Sabatier.)  Grignard was born in 1871 in Cherbourg and studied at the University of Lyons, receiving a bachelors degree in mathematical sciences in 1894.  He remained there to do graduate studies and at the age of 29 made the important breakthrough that was the basis of his 1901 doctoral thesis and for which he was later awarded the Nobel Prize. This breakthrough was the discovery of the “Grignard reaction,” which is a method for creating bonds between Carbon atoms and thereby creating larger organic molecules from smaller ones. The method involves an “organomagnesium” compound, called the “Grignard reagent,” in the intermediate steps of the process. (An account of the process can be found HERE and further details of his scientific work can be found at the official Nobel Prize biography of him.)  Grignard received many distinguished awards in addition to the Nobel Prize, including the Cahours Prize of the Institut de France (1901, 1902) , the Prix Jecker (1905), and the Lavoisier Medal (1912), and he was made Commandeur in the Légion d’Honneur in 1933.

Although his wife and son were very devout, Victor Grignard himself was indifferent to religion until late in life. The story of his conversion has been told by his parish priest, Fr. Laurent Remillieux.  An important moment came for Grignard when he attended a funeral and was profoundly moved, (“overwhelmed”) by the prayers and rites of the Mass. Somewhat later, in 1927, he watched a cousin receive the last rites of the Church and attended a series of lectures by an Oratorian priest. He was led to deeper reflection and study of religious questions. In 1935, as he was dying, he told Fr. Remillieux that he had overcome his earlier “ignorance” and was ready to make confession of his sins.