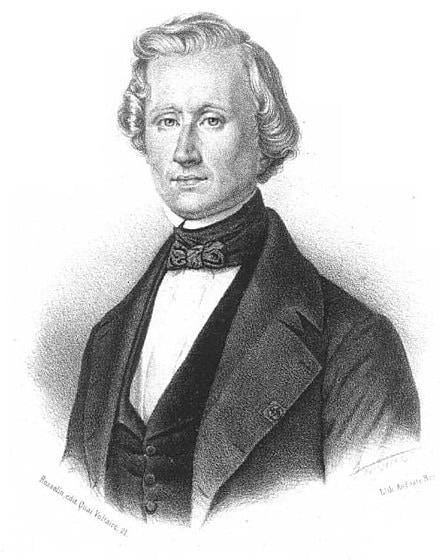 Urbain Jean Joseph Le Verrier (March 11, 1811 to September 23, 1877) Le Verrier was a French astronomer whose theoretical prediction of the existence and position of the planet Neptune led to its discovery.  The orbit of the planet Uranus was seen to deviate from the predictions based on Newtonian mechanics and gravity. After months of mathematical calculations, Le Verrier was able to show that this could be explained by the gravitational influence of a hitherto unsuspected new planet lying farther from Sun.  He was able to compute its position and orbit and sent this information to Johann Galle of the Berlin Observatory, who received it on September 23, 1846. On the same night, Galle and d’Arrest found the planet within 1o of its predicted position. This was one of the most sensational astronomical discoveries of the 19th century and a powerful confirmation of the accuracy of Newton’s theories. Le Verrier also studied the anomalous precession of the orbit of Mercury and showed that it could not be explained by Newtonian gravity and the perturbing influence of other planets.  Many decades later this anomalous precession was explained by Einstein’s theory of General Relativity. In the words of the Catholic Encyclopedia,

“Le Verrier was a zealous adherent and true son of the Catholic Church; even as deputy of the [French] Assembly he openly acknowledged and defended his Catholic faith before all the world. …  When dying he said in the words of the aged Simeon: “Nunc dimittis servum tuum, Domine, in pace” [Now let your servant depart in peace, O Lord]. … When, on 5 June, 1876, he presented to the Academy his completed tables for Jupiter, the result of thirty-five years of toil, he emphasized particularly the fact that only the thought of the great Creator of the unierse had kept him from flagging, and had maintained his enthusiasm for his task.”

In the words of François Arago, Le Verrier was “the man who discovered a planet by the point of his pen.”