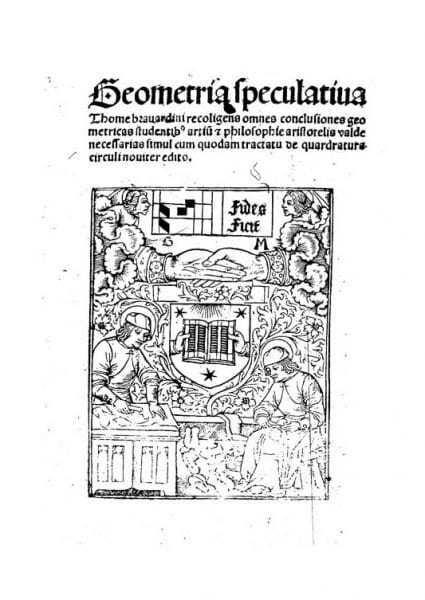 Thomas Bradwardine (ca 1300 to August 26, 1349) Bradwardine, who briefly was Archbishop of Canterbury before his death, was part of a group of thinkers called the “Oxford Calculators” or “Merton Calculators,” who made significant advances in the mathematical analysis of motion.  One of them, William Heytesbury, was the first person to prove the “mean speed theorem” (or “Merton Theorem”) which gives the distance traveled by a uniformly accelerating body. (And this required, of course, first understanding the concept of uniform acceleration, which is itself a substantial achievement, especially before the development of calculus.)  Bradwardine’s most interesting work was on the relation of force to motion. Aristotle had believed that the speed of an object was proportional to the force on it and inversely proportional to the body’s “resistance” to motion.  That is v is proportional to F/R. This leads to the strange conclusion that if the force is less than the resistance, the object will still move in the direction of the force.  Bradwardine tried to find a mathematical relation between force, resistance and velocity that would avoid this paradox. His proposed relation was that v is proportional to the logarithm of F/R (though he did not state it in that way). This implies (more sensibly) that a body will move in the direction of whichever force is larger. While Bradwardine’s relation is completely wrong (in fact, force is directly related to acceleration, rather than velocity, as Newton showed centuries later), it was one of the first attempts ever made to formulate a mathematical law of motion.  And it illustrates both the cleverness and originality of medieval scientists and their willingness to challenge the scientific ideas of Aristotle, despite his overwhelming prestige.