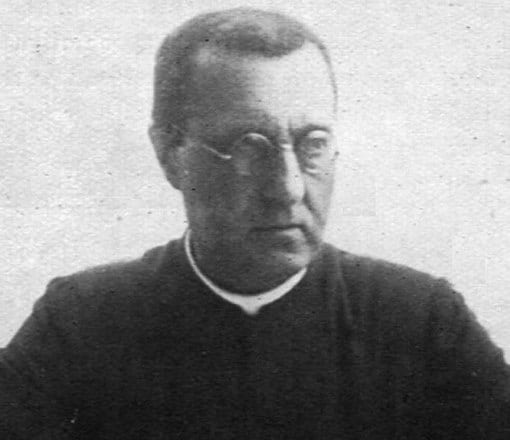 Theodor Wulf, S.J.  (July 28, 1868 to June 19, 1946) Wulf was a German Jesuit priest who first measured how ionizing radiation near the surface of the earth varies with altitude. After becoming a Jesuit priest, Wulf studied physics with Walther Nernst (who was to win the Nobel Prize in Chemistry on 1920) and then taught physics from 1904 to 1935 (except for the period of World War I) at the Jesuit university in Valkenburg. In 1909, Wulf designed and built a sensitive and portable electroscope (a device for measuring electric charge) and used it measure ionizing radiation at the earth’s surface at various locations.  He speculated that this radiation was caused by radioactivity in the ground and would therefore decrease with distance above the ground. To test his hypothesis, he ascended the Eiffel Tower with his electroscope in 1910 to compare the amount of radiation near the top and at the bottom.  He found that the decrease in radiation with altitude was surprisingly small, which (although he did not realize it) was due to radioactivity in the metal of the tower.  However, Wulf’s studies helped inspire Victor Hess to carry out the later studies which led to the discovery of cosmic rays, for which Hess was awarded the Nobel Prize in Physics in 1936.