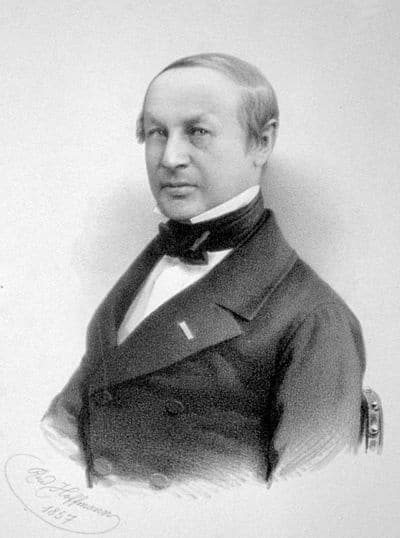 Theodor Schwann  (December 7, 1810 to January 11, 1882) Schwann was a German physiologist who made several major contributions to modern biology, the most famous of which is discovering that animals (like plants) are made up of cells. Using powerful microscopes, Schwann was able to see animal cells and to classify them into five types. In 1839, he published his research on this topic in a book entitled “Microscopic investigations on the similarity of structure and growth of animals and plants,” which is considered a foundational work. He discovered the cells that wrap around peripheral nerves, which are called “Schwann cells” in his honor. In studying the process of digestion, he isolated an enzyme, which he named “pepsin,” from the lining of the stomach. This was the first enzyme to be isolated from animal tissue. Schwann showed that pepsin could break down albumin from egg-white into peptones.  From his research on yeast and fermentation, he concluded that yeast is a living organism and that its life processes converted sugar into alcohol. Other biologists rejected this conclusion and argued that fermentation is an inorganic process. The dispute was later settled by Pasteur, who began his researches by repeating and confirming the results of Schwann’s experiments. Schwann also made contributions to embryology, observing that the egg is a single cell that develops into a complete organism.  Schwann was a consistent opponent of “vitalism,” the notion that there is a distinct “life force” or “vital principle” required to explain biological processes.  At the same time, he rejected materialism, writing,

“I rejected all teleological explanations which made appeal to a purposive vital force and admit only in the case of man (on account of his moral freedom) the presence of a principle substantially different from matter. This latter point, to which I cling with absolute conviction, sets a gulf between my system and that of the materialists.”

Schwann was a strongly committed Catholic. He wrote (again in regard to vitalism),

“I have always preferred to find the source of that purposiveness, of which the whole course of nature gives conclusive evidence, not in the thing created but in the Creator.”