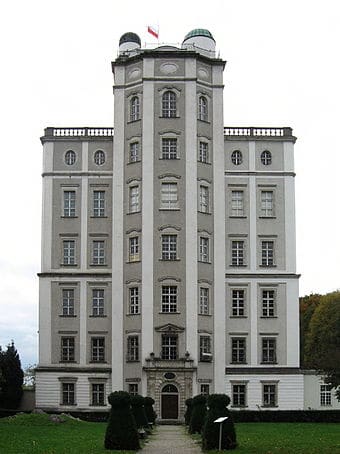 Thaddäus Derfflinger, O.S.B.  (December 19, 1748 to April 18, 1824) Derfflinger was an Austrian astronomer and Benedictine monk who made observations of sunspots in the early 19th century that are valuable for present-day researchers trying to understand solar activity and its effects on the earth.  Fr. Derfflinger made his observations at the Kremsmünster Observatory, where he was director from 1791 until his death 33 years later.  (This was the observatory of the Kremsmünster Abbey, a Benedictine Monastery that was founded in 777 AD.)  Fr. Derfflinger made continuous observations of sunspots from 1802 to 1824, not stopping even during Napoleon’s invasion of Austria in 1804-5.  The period of Derfflinger’s observations is important because it nearly coincides with the so-called Dalton Minimum, a period of very low sunspot numbers and solar activity.  There is a relative paucity of data from the Dalton Minimum, which makes Derfflinger’s observations particularly valuable. A research paper in the 2/20/2020 issue of the prestigious Astrophysical Journal by a group of astronomers from Japan, Austria and other countries drew important conclusions about the Dalton Minimum based on data taken by Derfflinger that they retrieved from the monastery’s archives and analyzed.   As that paper noted, “It is important to investigate and reconstruct solar activity of the past, as it provides fundamental input for several fields, such as solar dynamo theory, the solar-terrestrial relationship, space weather, space climate, terrestrial climate change, and for predictions of upcoming solar cycles.”

Copyright Information on Photograph of The “Mathematical tower” of the Kremsmünster Abbey in Upper Austria by H. Raab