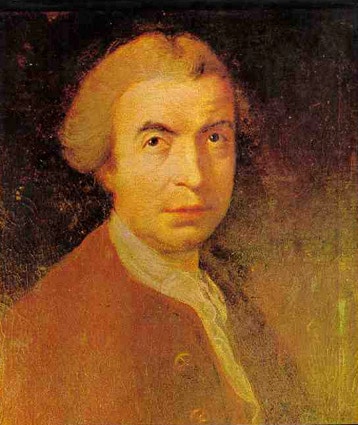 Rudjer Boscovic, S.J. (also Roger Boscovich) (May 18, 1711 to February 13, 1787) Boscovic was a Croatian astronomer, physicist, and Jesuit priest, who is most famous for his ideas about atoms, which in certain respects were far ahead of his time.  The idea that matter is made up of indivisible units, or “atoms,” goes back to the ancient Greeks, who supposed atoms to be bits of matter with finite size and definite shape. “Atomism” in this form was revived in the 17th century. Newton made some advance on this idea, by supposing atoms to be points possessing mass and capable of gravitational attraction. However, he proposed no theory of how atoms interact other than gravitationally or how they coalesce to form solids and liquids. Boscovic took these ideas further to propose that there were new forces between atoms that were attractive at large distance, repulsive at very short distance, and possibly alternating in between. In the twentieth century, this idea was shown to be correct (e.g. the Lennard-Jones potential between neutral atoms). In the words of the historian I. Bernard Cohen, Boscovic’s “writings about science elicited the highest praise from leading men of science including — among others — Faraday, Clerk Maxwell, J.J. Thomson, Laplace, Ampère, Helmholtz, Hertz and Lorentz. In 1870, Mendeléev compared Boscovich to Copernicus and held him to be the ‘founder of modern atomism.’” Boscovic also made notable contributions to astronomy, and it is likely at his urging that Pope Benedict XIV lifted the general ban on books espousing Copernicanism in 1758.