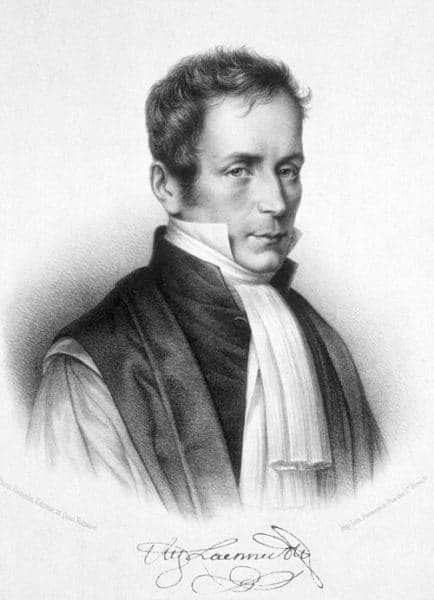 René-Théophile-Hyacinthe Laennec (February 17, 1781 to August 13, 1826) Laennec was a French physician most famous for inventing the stethoscope in 1816.  Listening to the chest and “percussion” had been a traditional technique in diagnosing patients. The practical difficulty of hearing well, however, led Laennec to develop an improved method he called “indirect listening” (“mediate auscultation”).  The idea was suggested to him by seeing children playing a game in which they scratched one end of a stick with a pin and listened at the other end.  The great improvement in audibility provided by his invention allowed Laennec to refine this method of diagnosis. In 1819 he published his magnum opus “De l’auscultation médiate ou Traité du Diagnostic des Maladies des Poumon et du Coeur” (“On Indirect Listening, a Treatise on the Diagnosis of Maladies of the Lungs and Heart”).  Laennec was deeply devout. Sir John Forbes, who translated Laennec’s treatise into English, wrote of him that “Laennec was a man of the greatest probity, habitually observant of his religious and social duties. He was a sincere Christian, and a good Catholic, adhering to his religion and his church through good report and bad report.”