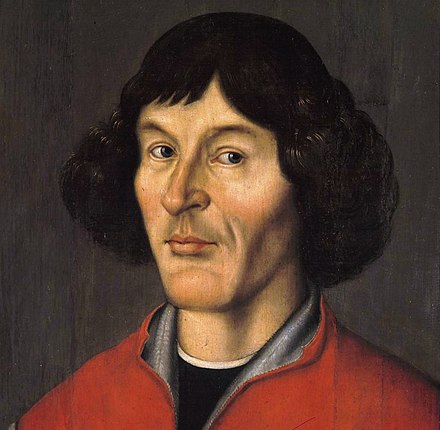 Nicolaus Copernicus (the Latinized version of the Polish name Mikolaj Kopernik) (February 19, 1473 to May 24, 1543) Copernicus was a Polish astronomer whose heliocentric theory helped set in motion the Scientific Revolution from which modern science was born. Copernicus was born in and lived most of his life in the Kingdom of Poland. When his father died around 1483, Copernicus’s uncle, Lucas Watzenrode, a Catholic bishop, took responsibility for his upbringing and education. Copernicus studied at the University of Kraków and then travelled to Italy to study canon law at the University of Bologna and medicine at the University of Padua. Through all this time he was also studying and thinking about astronomy. Upon his return to Poland, Copernicus served as secretary and physician to his uncle, who also obtained a position for him as canon of Frombork (or Frauenberg) Cathedral. When his uncle’s died, Copernicus took up his duties as cathedral canon and remained in Frombork for most of the rest of his life. Though an official of the Church, it is doubtful whether Copernicus was ever ordained to the priesthood.  He worked on his heliocentric theory of astronomy for many years, and rumors of his ideas circulated around Europe, arousing widespread interest, including that of Pope Clement VII and several cardinals, who attended a series of lectures on the theory in 1533. In 1536, Cardinal Nikolaus von Schönberg urged Copernicus to “communicate this discovery of yours to scholars.” However, Copernicus was reluctant to publish his theory for fear of ridicule or opposition. Nevertheless, he eventually did publish it under the title De Revolutionibus Orbium Coelestium (On the Revolutions of the Heavenly Spheres). The book appeared in 1543, the year of his death, and legend has it that he received a copy on his deathbed.  This is perhaps the most important book in the history of science, along with Newton’s Principia. Copernicus’s theory was later improved upon by Johannes Kepler (who enormously simplified it by introducing elliptical planetary orbits instead of the complicated system of cycles and epicycles). Though Copernicus regarded his theory as a description of physical reality, many others saw it as merely a mathematical model. So, when Galileo began to champion its physical truth in the early 17th century, it provoked heated debate. There were scientific, philosophical, and theological arguments against heliocentrism and it seemed to fly in the face of common sense and everyday experience. The controversy came to a head in 1633, leading to the Church’s condemnation of Copernicanism and of books advocating it and the forced recantation by Galileo. The debate continued among scientists for several decades after that. It required the physics of Newton to give the theory a solid foundation and settle the science. Newton’s Principia was published in 1687 and it was this that finally swung scientific opinion solidly behind heliocentrism. Direct experimental evidence of the earth’s motion came in 1729 with the observation by James Bradley of the “aberration” of starlight. The Church’s ban on books that advocated Copernicanism was dropped in 1758 by Pope Benedict XIV, probably at the suggestion of the Jesuit scientist Rudjer Boscović.