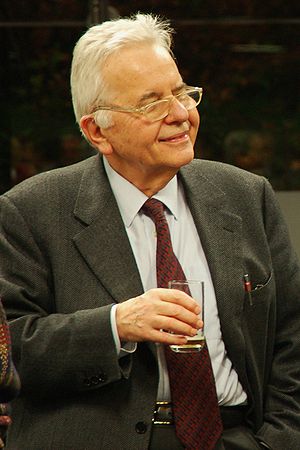 Nicola Cabibbo (April 10, 1935 to August 16, 2010) Cabibbo made many contributions to theoretical particle physics, the most famous of which is the Cabibbo theory of how quarks interact via the Weak force, which is now part of the Standard Model of particle physics.  In the 1950s, types of particles were discovered that possessed a property that physicists named “strangeness.”  The way these particles behaved with respect to Weak interactions raised a number of theoretical conundrums. The seed of the solution was contained in a 1960 paper by M. Gell-Mann and M. Levy, but it was Cabibbo who developed the idea in a more correct physical and mathematical form in a classic 1963 paper (which is among the top 15 most cited papers in the history of theoretical particle physics). Cabibbo’s theory was able to successfully explain many experimental results involving particles with “strangeness.” It contained a parameter that came to be called the “Cabibbo angle,” which (in today’s terms) describes how the first and second “families” of quarks “mix” with each other. In 1973, two Japanese theorists, M. Kobayashi and T. Maskawa, hypothesized the existence of a third “family,” which turned out to be correct.  The mixing of all three families of quarks is described in the Standard Model by a 3×3 matrix now called the Cabibbo-Kobayashi-Maskawa matrix (or “CKM matrix”). To the surprise of many physicists, the 2008 Nobel Prize was awarded to Kobayashi and Maskawa without Cabibbo. Cabibbo was, however, the recipient of many distinguished awards, including the Sakurai Prize (1989), the Pomeranchuk Prize (2009), the P.A.M. Dirac Medal (2010), and the Benjamin Franklin Medal (2011). Cabibbo was a devout Catholic and served as President of the Pontifical Academy of Science from 1993 to 2010.

Copyright information on Picture of Nicola Cabibbo   Picture of Cabibbo is the work of Marcella Bona.