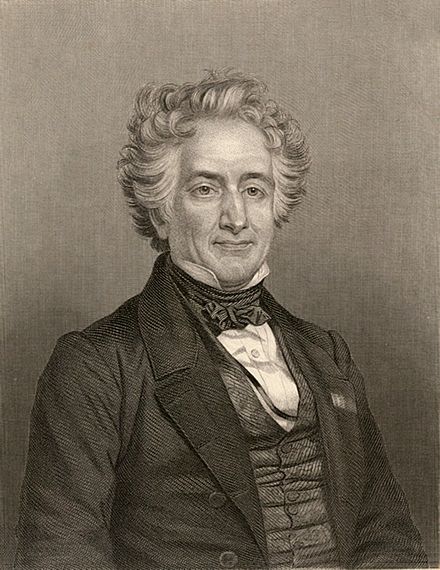 Michel Eugène Chevreul (August 31, 1786 to April 9, 1889) was a French  chemist best known for his researches on fats and oils that inaugurated the field of organic chemistry.  Chevreul started his career at the age of seventeen as an apprentice to the famed chemist Louis Nicolas Vauquelin, later becoming his assistant at the National Museum of Natural History, and eventually succeeding him there, in 1830, as professor of organic chemistry.  In 1816 he began his researches into animal fats and oils, which were published in 1823 as Recherches sur les corps gras d’origine animale. He introduced the concept of fatty acids, and isolated several types of them (oleic, stearic, and heptodecanoic). He showed that soaps resulted from a combination of a fatty acid with an alkali. His discoveries revolutionized the processes and extent of the manufacture of soaps and candles. He was the first to isolate the substance creatine and to show that diabetics excrete glucose.  For a period, Chevreul was director of the dye works at the Gobelins Manufactory in Paris.  This led him to do pioneering research into color perception.  He discovered and studied, for example, the phenomenon of “simultaneous contrast,” where the perception of color is affected by contrasting background colors.  Among his many honors, Chevreul was made a member of the Académie des Sciences and received the Copley Medal from the Royal Society of London.  Chevreul was a devout Catholic, who was outspoken in defense of religious belief and against crudely reductionist views of science.  He wrote,

“In an age when we hear it asserted more loudly than ever that modern science leads to materialism, … [I feel] duty bound to raise a protest against such assertions, diametrically opposed as they are to true science.  … [I am convinced] of the existence of a divine Being, the creator of a double harmony, the harmony which governs the inanimate world and which is revealed in the science of Celestial Mechanics and that of molecular phenomena, and the harmony which governs the organic world.  I have therefore never been a materialist … my mind having never been able to regard this double harmony as being the result of chance.”