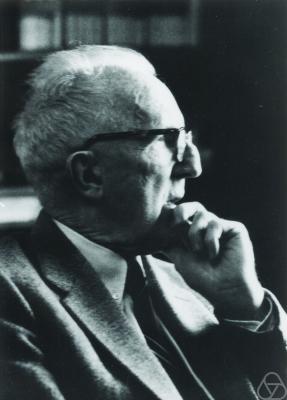 Marston Morse (March 24, 1892 to June 22, 1977) Harold Calvin Martson Morse was an American mathematician most famous for his contributions to the branches of mathematics called “the calculus of variations” and “topology” and in particular for developing a set of ideas and methods now known as “Morse theory.”  Morse received his Ph.D. in mathematics from Harvard University in 1917 and shortly thereafter joined the American Expeditionary Force in World War I and was awarded the Croix de Guerre with Silver Star for bravery under fire. After teaching at Cornell University and Brown University, he returned to Harvard to take a faculty position there in 1926.  An indication of his reputation as a mathematician is that in 1935 the recently founded Institute for Advanced Study in Princeton recruited him to join its School of Mathematics, which included such illustrious members as Albert Einstein, John von Neumann, Kurt Gödel, Hermann Weyl, and Wolfgang Pauli and was regarded as the top mathematical institute in the world.  He remained there until his retirement in 1962.

Morse made important contributions to the calculus of variations and to topology. (For a brief explanation of the calculus of variations and some of its applications see the article here on Ennio De Giorgi.) Topology is a branch of mathematics that studies the properties of geometrical shapes and objects that remain unchanged when the shapes are continuously deformed. For example, a “2-sphere” (the surface of a ball) and a “2-torus” (the surface of a doughnut) are topologically different, because one of them cannot be deformed into the other without a discontinuous change such as cutting or splicing.  Topological ideas are very important throughout mathematics and in many areas of physics.  “Morse theory” is an approach to topology developed by Marston Morse that studies the topological properties of “manifolds” (which are essentially smooth spaces of various dimensions, such as surfaces) by looking at the properties of mathematical functions defined on them.  Morse theory has found application in theoretical physics and, in particular, in “superstring theory,” which is the leading candidate at present for the fundamental unified theory of physics.

Morse received many honors, awards and distinctions in his lifetime, including the Böcher Memorial Prize of the American Mathematical Society, the National Medal of Science in 1964, membership in the U.S. National Academy of Sciences and in the academies of Italy and France, the presidency of the American Mathematical Society (1941-2), and honorary doctorates from twenty universities.  During World War II, he did defense research for which he received the Meritorious Service Award from President Roosevelt in 1944.  He was involved in the founding of the National Science Foundation (NSF) and served on its first board from 1950 to 1954.

Morse was a convert to the Catholic faith and a deeply religious man.  He was appointed by the Vatican to be its representative at the 1952 “Atoms for Peace Conference” of the United Nations.

Copyright information for the picture of Marston Morse