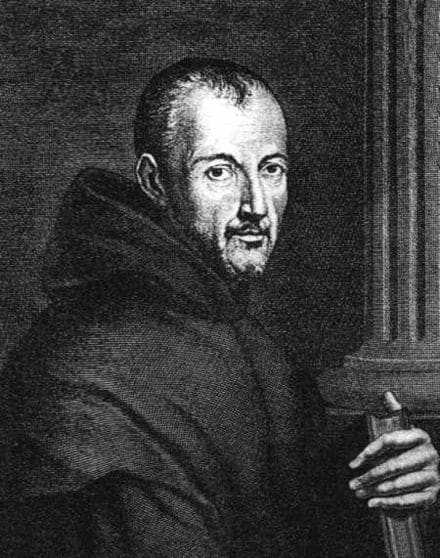 Marin Mersenne (September 8, 1588 to September 1, 1648) Mersenne, a French priest of the Minimite order, has been called “the center of the world of science and mathematics during the first half of the 1600s” (by the historian Peter L. Bernstein) and one of the “architects of the European scientific community” (by the Dictionary of Scientific Biography).  In those days one of the main channels by which scientists learned of their colleagues’ work was correspondence, and the main hub of that correspondence was Marin Mersenne. His religious house in Paris became a meeting place of famous scientists, including Descartes, Pascal, Fermat, Gassendi, and Roberval. In 1653, Mersenne organized the Academia Parisiensis, one of the first scientific organizations in Europe. Mersenne also did important research himself, especially about sound and vibrations.  He discovered the mathematical relation between the frequency of a vibrating string and its length, mass, and tension. He was the first to measure the speed of sound and he showed that it was independent of frequency and loudness. He also showed that sounds of the same pitch had the same frequency, no matter what musical instruments produced them. One of Galileo’s most famous discoveries was that the frequency of a pendulum is inversely proportional to the square root of its length, but Mersenne discovered it independently and published it a year before Galileo did.  Mersenne also contributed to the theory and design of reflecting telescopes.  According to a modern treatise on the subject (Reflecting Telescope Optics, by R.N. Wilson), which devotes several pages to discussing his contributions, “Mersenne’s work is often referred to, [but] its full significance is rarely appreciated. … Mersenne must be accorded the credit for inventing, on paper, the definitive basic geometrical form of the modern telescope.”

An interesting video about Fr. Mersenne can be found here: https://www.catholicscientists.org/idea/marin-mersenne-birth-of-modern-geometry-2