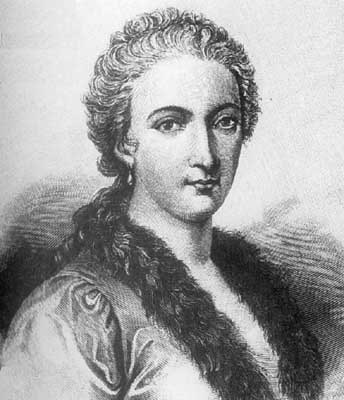 Maria Gaetana Agnesi  (May 16, 1718 to January 9, 1799)  Agnesi was an Italian mathematician who became the first woman to be appointed professor of mathematics at a university.  Agnesi was renowned as a child prodigy, speaking seven languages by the age of twelve.  At the age of fourteen she started studying physics and mathematics, as well as theology and philosophy. In 1748, she wrote a textbook on calculus, which was translated into English and French.  Pope Benedict XIV appointed her a professor of mathematics at the University of Bologna in 1750, making her the second woman in history to attain the rank of professor at a university (after Laura Bassi, another protégé of Pope Benedict XIV). Soon after, however, Agnesi decided to act upon her longtime desire to do charitable work. She founded the Hospice Trevulzio to serve Milan’s poor and elderly, devoting her later years to working with the nuns there.