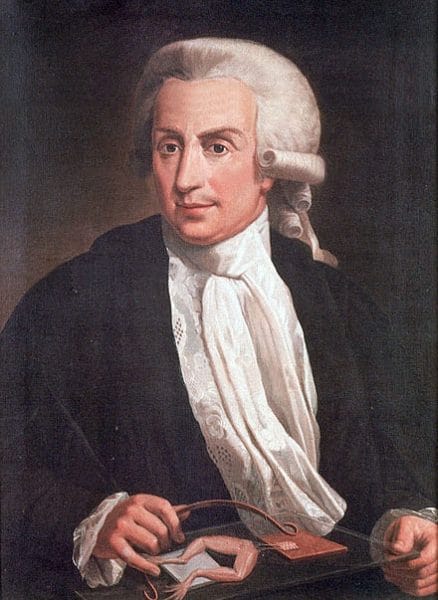 Luigi Galvani (September 9, 1737 to December 4, 1798) Galvani was a pioneer in bioelectricity and is famous for discovering what he termed “animal electricity. He obtained degrees in medicine and philosophy from the University of Bologna in 1759 and was appointed a permanent anatomist and honorary lecturer there in 1762. He married Lucia Galleazzi, the daughter of one his professors, and thereafter assisted in her father’s laboratory until succeeding him as professor and lecturer in 1775. Lucia worked with Luigi in his researches throughout their life together. Galvani discovered that electrical stimulation of a frog’s nerves could cause muscular contractions.  This led him to propose that what stimulated muscular movements in live animals was not a hydraulic effect mediated by air or fluid, as in some earlier theories, but electrical activity conducted through nerves. His treatise De viribus electricitatis in motu musculari (“On the power of electricity in muscular movement”), published in 1791 and 1794, was the beginning of the fields of bioelectricity and electrophysiology. Galvani interpreted the electricity that caused the frog’s legs to jerk in his experiments as arising from within the animal tissue and termed the effect “animal electricity.”  Alessandro Volta disputed this, arguing that the electricity was caused in some cases by the application of dissimilar metals to the frog. In investigating this, Volta was led to the discovery of the electric cell (which had pieces of different metals, such as copper and zinc, separated by an electrolyte), which in turn led him to the invention of the first battery. Galvani was devoutly religious and at the age of 15 desired to take vows and enter a religious order but was dissuaded by his parents. Later he became a member of the Third Order of St. Francis.