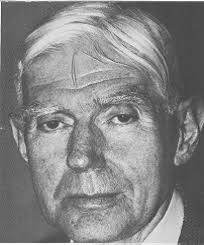 Karl F. Herzfeld  (February 24, 1892 to June 3, 1978)  Karl Herzfeld was an Austrian-American physicist who worked primarily in statistical physics, the theory of gases and liquids, ultrasonics, and molecular physics. Born in Austria, he studied in Vienna, Zurich, and Göttingen, before taking a position at the Ludwig Maximilians University (LMU) in Munich.  In 1926, he emigrated to the United States, where he was a faculty member at Johns Hopkins University (JHU) from 1926 to 1936 and the Catholic University of America from 1936 to 1969. He was the author of numerous influential scientific review articles and books, both in German and English. Among his doctoral students were the famous physicists Walter Heitler (at LMU) and John Archibald Wheeler (at JHU). In 1969, he was elected to the (U.S.) National Academy of Sciences.  During World War II, Herzberg did weapons research for the U.S. Navy, but he declined to become involved in the effort to make the atomic bomb, as he thought such a weapon would not discriminate between civilians and combatants and was therefore not consistent with traditional Catholic moral teaching.