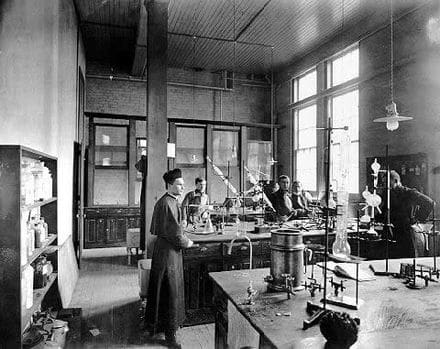 Julius A. Nieuwland, C.S.C. (February 14, 1878 to June 11, 1936) Nieuwland was a priest, chemist, and botanist. Born in Belgium, he was brought at the age of two to the United States. After being ordained a priest of the Holy Cross order, he obtained a doctorate in chemistry from the Catholic University of America. In 1904, he became a professor of botany at the University of Notre Dame (where he had done his undergraduate work) and in 1918 a professor of organic chemistry there. In 1920, he discovered a method for polymerizing acetylene (H2C2). This was noticed by chemists at the DuPont Company, who were able to exploit this advance to synthesize neoprene, the first synthetic rubber. Neoprene has properties that make it useful in a wide range of applications.  In 1935, Fr. Nieuwland received the Nichols Medal of the American Chemical Society “for basic work on synthesis from unsaturated hydrocarbons” and the Gold Medal from the American Institute of Chemists.  He was inducted into the (U.S.) National Inventors Hall of Fame in 1996.  An article about Fr. Nieuwland’s life and achievements in the February 1952 issue of The Scientific Monthly can be found here.