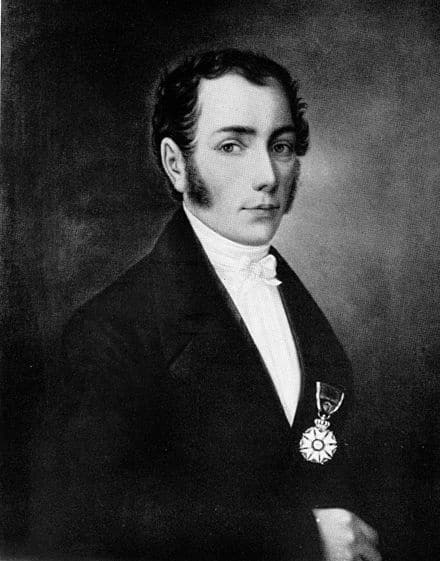 Joseph von Fraunhofer (March 6, 1787 to June 7, 1826) Fraunhofer was a Bavarian physicist and manufacturer of optical equipment. He invented the first modern spectroscope as well as the first diffraction spectroscope. In 1814, he discovered dark lines in the spectrum of the Sun’s light, which are now called “Fraunhofer lines” in his honor. Later these were understood to be “absorption lines” caused by certain wavelengths of light being absorbed by the cooler gas in the outer layers of the Sun. Fraunhofer discovered similar lines in the spectra of several stars and from the fact that they are differently located within the spectra of different stars inferred correctly that such lines were produced near the stars and not by the earth’s atmosphere. These discoveries inaugurated the field of stellar spectroscopy and thus modern astrophysics. (See also the article on Secchi.) Like many glassmakers of that time, he was poisoned by heavy metal vapors, which led to his death at the age of 39.  One source reports, “Fraunhofer was a man of disciplined and benevolent temper, occasionally clouded, it is true, by outbursts of his natural irritability. He was a loyal adherent of his religion, so thorough in his obedience that even those invited to his house were obliged to observe the prescribed fasts and abstinences.”