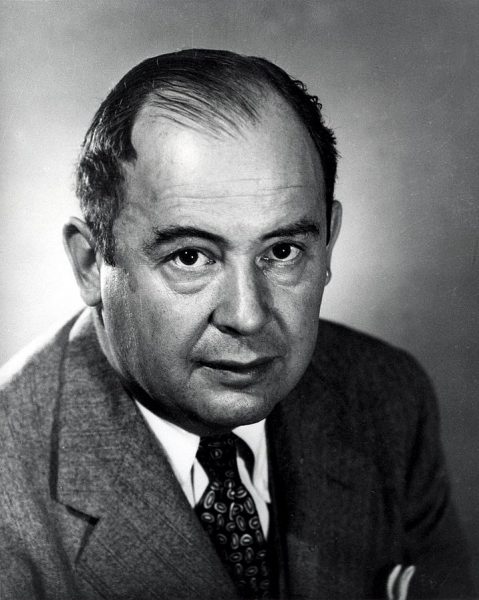 John von Neumann (December 28, 1903 to February 8, 1957) Von Neumann, who was born in Hungary and emigrated to the United States in 1933, is considered one of the greatest mathematicians of the 20th century.  He did pioneering work in many areas of both pure and applied mathematics.  His 1932 book “The Mathematical Foundations of Quantum Mechanics” gave the first rigorous mathematical formulation of the principles of quantum mechanics.  His 1944 book with Oskar Morgenstern, “Theory of Games and Economic Behavior,” founded the mathematical field of “game theory” and has had enormous impact on theoretical economics. His ideas also contributed greatly to the development of digital computers.  (Most modern programmable computers are based on what is called the “von Neumann architecture.”) Von Neumann also made fundamentally important contributions to set theory and to several branches of pure mathematics. Many of the great developments of the twentieth century bear the imprint of his genius. The speed and power of von Neumann’s intellect were legendary and the subject of many anecdotes. Several great mathematicians and physicists who knew him well (including Hans Bethe, Edward Teller, and Eugene Wigner) spoke with awe of the seemingly superhuman rapidity of von Neumann’s thought processes.

Von Neumann’s religious beliefs (or lack of them) have been the subject of much discussion. Jewish by birth, he accepted Catholic baptism in 1930 in order to marry, though he did not practice the faith and some of his colleagues saw him as “completely agnostic.” It therefore came as a great surprise to them that von Neumann, when dying of cancer in the hospital, sought the ministrations of a Catholic priest, Fr. Anselm Strittmatter, O.S.B., to whom he confessed and from whom he received the last sacraments of the Catholic Church. Some explained this as the act of a desperate man who was known to have an unusually great horror of death.  On the other hand, that he had some belief is indicated by the fact that he once confided to his mother, “There probably has to be a God. Many things are easier to explain if there is than if there isn’t.”  And surely it is significant that when confronted by his own mortality, and whatever his doubts, it was to the Church and her sacraments that he turned.