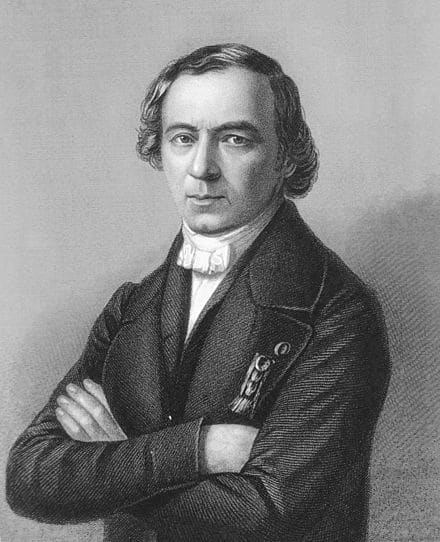 Jean-Baptiste Dumas (July 14, 1800 to April 10, 1884) Dumas was one of the leading chemists in France in the mid-19th century.  He is best known for the “Dumas method” of determining atomic and molecular weights and for determining the atomic weights of thirty chemical elements.  Eventually his method was superseded by other techniques, including mass spectroscopy. Dumas is also known for the “Dumas method” of determining the amount of nitrogen in chemical substances. This method is still widely used, especially to determine the protein content of foods, because it is relatively fast and easy to use and fully automatable. In 1832, Dumas was made a member of the Académie des Sciences and in 1843 he received the Copley Medal from the Royal Society of London. Dumas was outspoken in defending Christian ethics and Christian beliefs about the spiritual soul and the eternal destiny of human beings, which he saw as being the most solid foundation of human equality and rights. He wrote,

“Under this new [Christian] dispensation, right no longer bows before might; justice takes all nationalities under its scepter; fraternal affection is not limited by the color of men’s skins; freedom raises to their feet the most oppressed races and castes; the humblest finds a shield for his defense in his divine origin; and the most powerful recognizes that he is answerable before the eternal tribunal.”

He also frequently and eloquently opposed the claim that science supports philosophical materialism:

“The materialism of Empedocles … had lost its beauty under the scrutiny of Christian Ethics; now, after 2,000 years, it seeks to renew itself by a wholly fallacious reading of the discoveries of modern science.”