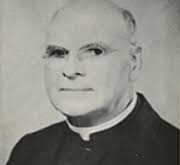 James B. Macelwane, S.J.  (September 28, 1883 to February 15, 1956) The Jesuit order played an important role in the development of the science of seismology, especially in its early years. (See “The Jesuit Contribution to Seismology,” https://www.seismosoc.org/inside/eastern-section/jesuit-contribution-seismology/  Also this video of a talk at the 2021 SCS conference.) It did this through the establishment of numerous seismic observatories in Jesuit institutions around the world. In many countries, especially undeveloped ones, Jesuits were the first to establish seismographic stations. In the United States, many Jesuit institutions cooperated in the establishment of a network of seismographs called the Jesuit Seismological Service (later renamed the Jesuit Seismological Association). A large role in these efforts was played by Fr. Macelwane. In recognition of his work, the American Geophysical Union (AGU) awards an annual James B. Macelwane Medal, which is regarded as the highest honor for young scientists in the field of Geological and Planetary Sciences. Also named in his honor is the Macelwane Fellowship given by the American Meteorological Society. Fr. Macelwane served as president of the AGU from 1953-6, and was elected to the (U.S.) National Academy of Sciences in 1944.