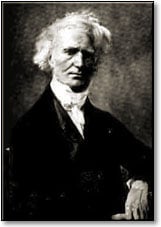 Jacques Philippe Marie Binet (February 2, 1786  to May 12, 1856) Binet was a French mathematician, physicist and astronomer. He made significant contributions to number theory and was the first to describe the rule for the multiplication of matrices. Binet’s Theorem, the Binet-Cauchy identity, the Cauchy-Binet formula, and the Binet equation are named after him. Elected to the Académie de Sciences in 1843, he was president of it at the time of his death. According to the Catholic Encyclopedia, “Binet was a man of modest manner and a devout Catholic.”