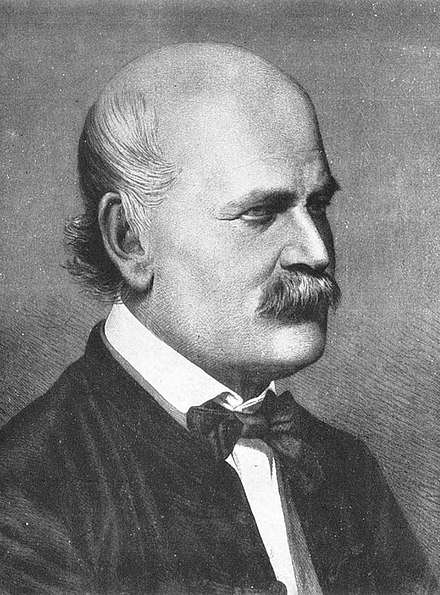 Ignaz Philipp Semmelweis  (July 1, 1818 to August 13, 1865)   Semmelweis, the “savior of mothers,” was a physician who discovered that antiseptic procedures in maternity wards could greatly reduce incidence of mortality among mothers. In the nineteenth century, puerperal fever (or “childbed fever”) led to very high rates of maternal mortality and there was no understanding of the causes or any effective treatment. While working in the obstetrical clinic of the Vienna General Hospital, Semmelweis noticed that the maternal mortality rate in the doctors’ ward was several times higher than in the midwives’ ward. Having eliminated various other explanations, he concluded that the disease was spread by doctors who had had contact with corpses (thus contaminating patients with what he called “cadaverous particles”).  He introduced the practice of doctors washing their hands with calcium hypochlorite before examining the mothers. The rate of deaths from puerperal fever declined drastically as a result. Despite evidence that his antiseptic method worked, his attempt to promote his ideas among doctors throughout Europe met with fierce opposition and often ridicule. This was largely due to the fact that Semmelweis had no viable theory of how the disease spread or why his antiseptic methods worked (this was before the discoveries of Pasteur). Other factors were Semmelweis’s relative lack of status in the medical field, resentment by doctors of the idea that their methods were at fault, and the fact that many doctors already washed their hands with soap (which was inadequate). Paradoxically, Semmelweis was accused of being unscientific by those who refused to test his methods on the grounds that his theory of the disease’s transmission was poorly grounded and sounded superstitious.  Some even blamed his “superstition” on his Catholicism.  His failure to convince the medical community, and the avoidable suffering and death this caused, frustrated Semmelweis to the point of desperation. He grew increasingly bitter and strident, and in 1865 showed signs of mental breakdown. He was committed to a mental asylum, where he was badly beaten by guards and subjected to harsh conditions, leading to his death (ironically, from infection) two weeks after his admission.