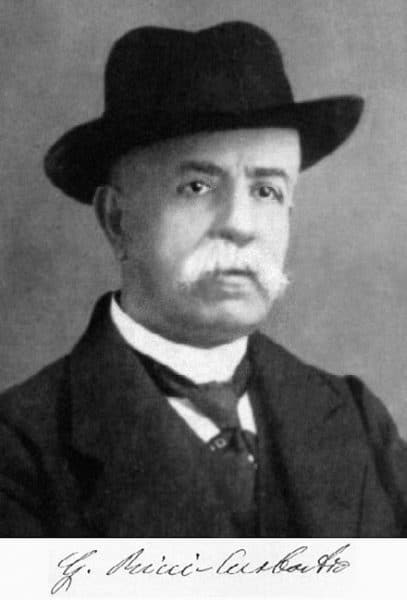 Gregorio Ricci (also known as Gregorio Ricci-Corbastro) (January 12, 1853 to August 6, 1925) Ricci was an Italian mathematician whose most notable achievement was developing, in collaboration with Tullio Levi-Civita, the field of tensor calculus, which is a generalization of vector calculus and is important in many branches of physics as well as in engineering.  Tensor calculus is particularly important for the formulation of the General Theory of Relativity (Einstein’s theory of gravity). In that theory, the “Ricci curvature tensor” Rμν and the “Ricci scalar curvature” R  are used to describe the curvature of spacetime. These appear in Einstein’s Equations for the gravitational field, which are written

where gμν is the “metric tensor” of spacetime, Λ is the cosmological constant, G is Newton’s gravitational constant, c is the speed of light in vacuum, and Tμν is the “stress-energy tensor” (which describes how the energy and momentum of matter are distributed and flowing in space).  Ricci’s Catholic faith is reflected in this excerpt from his spiritual testament:

“Only in the faith of Christ and in the Gospels have I found comfort in the troubles of life and a sure guide to lead me in life itself. Only the faith of Christ can give a satisfactory answer to those questions that are imposed even on those who do not want to know: Why are we in this world? What awaits us after this life, which, even when long, ends so soon? And how must we conduct ourselves to achieve the end for which we were created.”