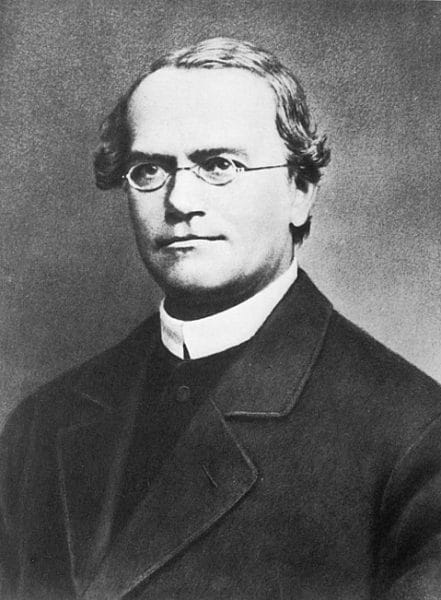 Gregor Johann Mendel  (July 20, 1822 to January 6, 1884)  Gregor Mendel was an Augustinian friar who is credited with founding the science of genetics. Mendel was born of a German-speaking family in a part of the Austrian Empire that is now part of the Czech Republic. After university studies, Johann Mendel entered the Augustinian Order, taking as his new “name in religion” Gregor. He studied to become a teacher (at one point taking a class from Christian Doppler at the University of Vienna), but twice (in 1850 and 1856) he failed the oral part of the exam due to nervousness. With the permission of the Abbot of his monastery (St. Thomas’s Abbey in Brno), Mendel undertook research in the monastery’s botanical gardens, which the Abbott had planted many years earlier.  From 1856 to 1863, Mendel carried out experiments breeding pea plants of the species Pisum sativum.  In particular, he chose to study the inheritance of seven traits (seed shape, seed coat tint, flower color, flower location, pod shape, unripe pod color, and plant height).  Altogether Mendel grew and tested about 28,000 plants.  He discovered mathematical patterns in the inheritance of these traits, which he explained in terms of two laws (the “Law of Segregation” and the “Law of Independent Assortment”), which are now called Mendel’s Laws of Inheritance.  These concern what are now called “genes” (Mendel called them “factors”) and are the beginning of the science of genetics.  Mendel gave talks on his discoveries at two scientific meetings in 1865, published his results in a relatively obscure scientific journal, and corresponded with a leading biologist of the time, Carl Wilhelm von Nägeli, about them; but no one appreciated the importance of Mendel’s work or paid attention to it in his lifetime.  By 1900, Mendel’s laws were independently discovered by two other scientists, Hugo de Vries and Carl Correns, who also discovered Mendel’s writings and admitted the priority of his discovery.  The enormous importance of Mendel’s discoveries was immediately appreciated at that time and he achieved posthumous fame as the “father of genetics.”