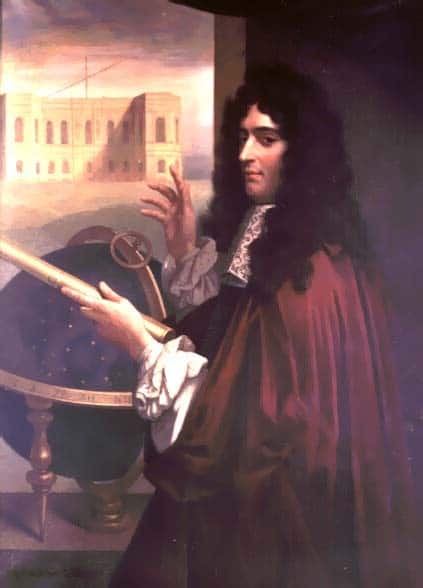 Giovanni Domenico Cassini (June 8, 1625 to September 14, 1712) Cassini is considered the greatest observational astronomer of the 17th century after Kepler and Galileo, with many discoveries to his credit. He was born in Tuscany and studied under the Jesuit scientists Giovanni Battista Riccioli and Francesco Grimaldi.  In 1650, he became the principal chair of astronomy at the University of Bologna. In 1669, he was invited to Paris to set up the Paris Observatory, where he remained as Director until his death. Cassini discovered four of Saturn’s moons (Huygens had discovered Titan, its largest moon, earlier). He discovered the gap in Saturn’s rings that is now called the “Cassini Division”. He discovered the Great Red Spot on Jupiter (independently of Robert Hooke) and was the first to observe differential rotation within Jupiter’s atmosphere. He also determined the rotation rate of Mars and Jupiter and gave the correct explanation of “zodiacal light.”  One of his more remarkable achievements was to measure the size of the Solar System.  He did this by observing Mars simultaneously with a colleague whom he had dispatched to French Guyana. Parallax gave the distance to Mars, which then by angular measurements gave the distances between other objects in the Solar System.  The important Cassini space probe is named after him.  Cassini’s Catholic piety is reflected in the fact that while living in Italy he sent a manuscript to Riccioli treating of the Immaculate Conception and recommending that it be celebrated as a special feast.

Copyright information on Picture of Giovanni Domenico Cassini   Painting of Cassini by Durangel 1879.