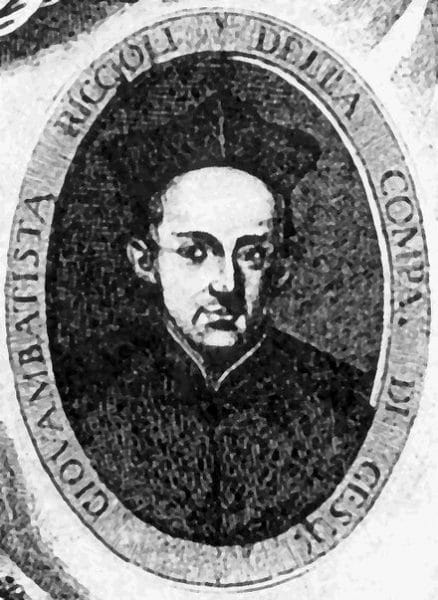 Giovanni Battista Riccioli, S.J. (April 17, 1598 to June 25, 1671) Riccioli was a Jesuit priest, astronomer, and physicist. In 1651, he published a massive treatise on astronomy (the Almagestum Novum), which became a standard reference work for astronomers throughout Europe for many decades.  With his fellow Jesuit, Francesco Grimaldi, he made the first map of the moon’s surface, establishing the names still used for its main features. Riccioli developed methods for measuring time more accurately in experiments and used them to make the first accurate measurement of the acceleration of gravity on the earth’s surface and also to make the first accurate tests of Galileo’s Law of Falling Bodies, which was important for establishing its validity.  With this improved accuracy, he was able to detect small deviations from Galileo’s principle that bodies with different masses fall at the same rate, and he correctly ascribed this to the effects of air resistance. Riccioli and Grimaldi discovered and analyzed the important “Coriolis Effect” in physics two hundred years before Coriolis did, though of course their mathematical treatment was necessarily less sophisticated given that they lived before the discoveries of Newton.