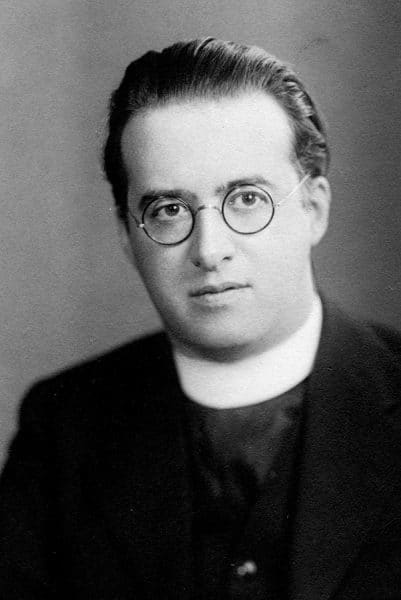 Georges Henri Joseph Édouard Lemaître  (July 17, 1894 to June 20, 1966)  Lemaître was a Belgian priest, theoretical physicist and mathematician who proposed the Big Bang theory, which is the central pillar of modern cosmology. Einstein published his theory of gravity (called General Relativity)  in 1916.  In 1922, a Russian mathematician Alexander Friedmann and a few years later Georges Lemaître, independently, found solutions to Einstein’s gravitational field equations that described a universe in which space itself is expanding. (The “metric tensor” that describes this is now called the “Friedmann-Lemaître-Robertson-Walker metric” or “FLRW metric.”) Meanwhile, the astronomer Slipher found evidence that galaxies were flying apart from each other at tremendous speeds.  It was Lemaître who combined these observations with the mathematics of General Relativity to propose, in 1927, that the universe is indeed expanding.  He also predicted from this hypothesis that the rate at which remote galaxies are receding from the earth should be proportional to their distance away. Few knew of Lemaître’s prediction at the time, so that when the astronomer Edwin Hubble discovered this relationship from observations in 1929 it came to be called the “Hubble Law” of cosmic expansion. In 2018, an overwhelming vote by the membership of the International Astronomical Union recommended that it be renamed the “Hubble-Lemaître Law.” In 1930, Lemaître suggested that the expansion of the universe began from a state of enormous density, which he called “the Primeval Atom” and which is now called “the Big Bang.” Lemaître’s thinking about cosmology was remarkably prescient in several ways. He predicted that there should be observable radiation left over from the Big Bang explosion, which is correct, though he incorrectly identified it with cosmic rays.  This “cosmic background radiation,” which is now redshifted by the cosmic expansion to the microwave part of the electromagnetic spectrum, was discovered by Arno Penzias and Robert W. Wilson in 1964.  Lemaître also suggested that quantum effects should be of great importance at the time of the Big Bang, which is also believed to be correct (though his particular idea that the Big Bang was a radioactive decay of the “Primeval Atom” is not).  And in order to accommodate a realistic age of the universe, he proposed models in which the “cosmological constant,” a possible term in Einstein’s equations, leads to an accelerating phase of the universe’s expansion.  As it happens, in 1998 it was discovered that the universe’s expansion is indeed accelerating, due to “dark energy,” which is thought most likely to be the cosmological constant (though Lemaître’s particular model is not right in detail).  Lemaître was opposed to linking particular scientific theories, including the Big Bang theory, to theological ideas, as each field must respect its own methods and competences. (For more details of Fr. Lemaître’s scientific biography and scientific contributions see this article.)