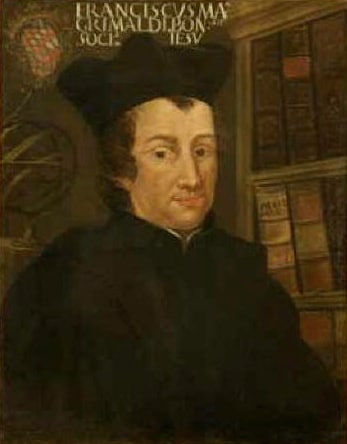 Francesco Maria Grimaldi, S.J. (April 2, 1618 to December 28, 1663) Grimaldi, a Jesuit priest, physicist, and astronomer, made one of the most significant discoveries in the history of physics, namely the phenomenon of diffraction of light, which shows that light does not travel in straight lines. Grimaldi’s discovery came about through careful and systematic observation. He studied the shadows cast on a screen by objects of various shapes illuminated by a thin beam of sunlight that he allowed to enter a darkened room through a small aperture in the wall. He discovered that within the shadow region on the screen there were faint fringes of light, and in the illuminated region there were faint fringes of shadow. Grimaldi not only discovered these “diffraction fringes,” he made very careful observations of their number, intensity, and coloration, and how they looked for objects of different shapes.  It was also he who coined the term “diffraction.”  It was not until the work of Thomas Young and Augustin-Jean Fresnel in the early 19th century that diffraction was understood theoretically in terms of the wave nature of light. As quantum mechanics implies that all particles are also wave-like, the phenomenon of diffraction is of key importance in many branches of physics.  Working with Riccioli, his fellow Jesuit, Grimaldi was the first to make accurate measurements of the gravitational acceleration at the earth’s surface (g), and also to map the surface of the moon.