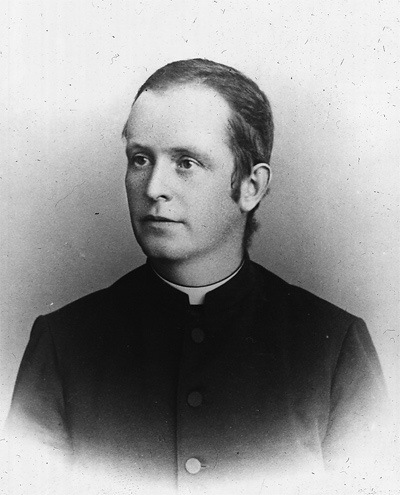 Erich Wasmann, S.J. (May 29, 1859 to February 27, 1931)  Erich Wasmann was an Austrian Jesuit priest and entomologist who is famous both for his research on ants and for being an early  advocate of the theory of evolution.

Wasmann was born in Tyrol, Austria, in 1959, the year that Darwin’s Origin of Species appeared.  He attended a famous Jesuit secondary school in Feldkirch, Austria, and there felt the call to the priesthood and the Jesuit order.  In 1883, while he was pursuing his theological studies in the Netherlands, the book Ants, Bees, and Wasps by the English polymath John Lubbock was translated into German. This book sparked new interest among scientists in these “eusocial” insects.  Wasmann himself started to study ants in 1884, first in their natural habitat and later by building artificial ant colonies.  Over the years he built up a unique collection that ultimately comprised more than 1,000 species of ants, 200 species of termites, and 2,000 species of “myrmecophiles,” which are insects that live in association with ants as “inquilines.” (An inquiline is a species that lives in the nest or burrow of a host species, benefitting from it without harming it.)  During his lifetime, Wasmann described 933 new species.

Wasmann made extensive studies of the interactions between ants of the same species, as well as between ants of different species, and between ants and myrmecophiles, most importantly the beetles of the order Staphylinidae.   He first described the phenomenon that is still known today as “Wasmannian mimicry,” noting that the myrmecophiles resemble their hosts by sending olfactory signals, or by imitating them in size, shape, color or surface microstructure. Through evolutionary adaptation over time, they had become similar to their hosts, but different from their closest relatives. (There are other forms of animal mimicry, such as Batesian mimicry, Muellerian mimicry, and Peckhamian mimicry.)

Wasmann’s scientific work convinced him of the explanatory power of Darwin’s theory of evolution. In 1904, he published a book with a generally positive view of evolution entitled “Die moderne Biologie und die Entwicklungstheorie,” which was published in English translation in 1910 as “Modern Biology and the Theory of Evolution.”  In 1907 and 1910 he gave series of lectures arguing for the consistency of the idea of biological evolution with the Catholic faith.  He also wrote the article on “Catholics and Evolution” in 1909 for the Catholic Encyclopedia. Though his ideas ran into some theological opposition, Wasmann’s influence helped evolutionary ideas gain the acceptance they came to enjoy in the Catholic Church.  In one of his 1910 lectures he wrote,

“Evolution theory does not stand in hostile opposition to the Christian doctrine of creation, but it complements it in the most beautiful way.  A God who was able to create a living world capable of development is immeasurably greater and more sublime in his power and wisdom than a God who could only put all creatures into the world as rigid, unchangeable automatons. This has already been presciently expressed by great minds of the Christian Middle Ages and antiquity, such as Thomas Aquinas and Augustine. We may therefore remain calm and firm in our sublime Christian words of creation: In the beginning, God created heaven and earth.”

[This article is based on the longer article by Dr. Berta Moritz that appeared as the December 2021 Monthly Article on the SCS website.]

Copyright information on the picture of Erich Wasmann