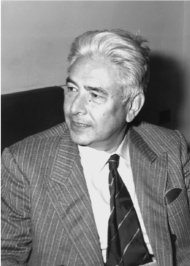 Ennio De Giorgi  (February 28, 1928 to October 25, 1996)  De Giorgi was an Italian mathematician most famous for solving one of “Hilbert’s problems.”  In 1900, the great mathematician David Hilbert published a list of 23 problems that he regarded as the most important unsolved problems in mathematics.  Hilbert’s list had enormous influence in the mathematical world and set the agenda for much of mathematical research in the 20th century and up to the present.  It is generally agreed by mathematicians that nine of Hilbert’s problems have been definitively solved. One of these, the 19th problem, was solved by Ennio De Giorgi and independently in a different way by John Forbes Nash.  Hilbert’s 19th problem concerned a branch of mathematics called the Calculus of Variations, which deals with finding shapes, curves or functions that maximize, minimize, or (more generally) “extremize” certain quantities. (For example, a sphere is the shape that has minimal surface area for a given enclosed volume.) Such “variational problems” are of great importance in physics and other branches of science.  In fact, in classical physics, all physical systems behave in such a way as to “extremize” a quantity called the “action.” (See the article on Pierre de Fermat.) De Giorgi also solved another famous mathematical problem having to do with the Calculus of Variations, namely “Bernstein’s Problem,” which had to do with surfaces with minimal surface area. De Giorgi was one of the leading mathematicians of the 20th century. He received the Wolf Prize in mathematics in 1990, considered one of the highest awards in that field. He was also elected to membership in many scientific societies, including the Académie des Sciences in Paris, and the (U.S.) National Academy of Sciences.  He wrote of himself.

“Having the need to declare my identity, I would begin by saying that I am Christian and Catholic and as such I recognize that I am a sinner, I hope in Mercy by the Lord, and this hope helps me through life’s difficulties, helps me to bear what I believe to be the greatest pain, which is the death of loved ones, as I wait for the resurrection of those who have passed.”