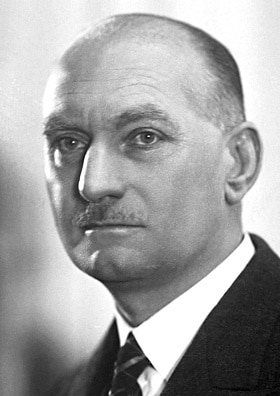 Corneille Jean François Heymans (or Corneel Heymans) (March 28, 1892 to July 18, 1968)  Corneille Heymans was a Belgian pharmacologist and medical researcher who received the 1938 Nobel Prize in Physiology or Medicine for discoveries concerning the mechanisms by which beathing is regulated.  Corneille Heymans was the oldest of the eight children of Jean-François Heymans, who had founded the Belgian Pharmacological Institute in Ghent.  After obtaining his doctorate in 1920 and studying under several famous physiologists in Switzerland, Austria, Britain and the United States, Corneille Heymans became a lecturer in pharmacology at the University of Ghent in 1922. Eight years later he took over the professorship of pharmacology from his father, with whom he did much of his early research.

Much of Heymans’s research concerned the mechanisms by which the body regulates blood pressure and respiration.  Most of the time, our breathing is an unconscious process regulated by the respiratory center in the medulla oblongata of the “brain stem.”  Heymans and his colleagues were able to show how signals are communicated from the brain stem through the “vagus nerves” to the respiratory muscles.  He also showed that an important part in the regulation of breathing is played by chemical sensors in the arteries that respond to the concentrations of oxygen and carbon dioxide in the blood.  In particular, he showed that a small structure in each carotid artery called the glomus caroticum is the location of these sensors, and that there is a similar sensory structure in the aorta, the glomus aorticum.  As a 1939 article in Nature noted, “Prof. Heymans is responsible for many other important advances in physiology and pharmacology, largely concerned with the control of the circulation.”  His discoveries have had great importance in the areas of anesthesia, emergency and intensive care, and the treatment of circulatory and respiratory disorders.

Heymans served as president of the International Union of Physiological Sciences and the International Council of Pharmacology. Besides the Nobel Prize, Heymans was the recipient of many other awards and honors from scientific organizations and universities around the world.

Heymans’s devotion to the faith is reflected in the fact that he was active in a Flemish Catholic student organization as a young man and served on its board.  He was elected to membership in the Pontifical Academy of Sciences, from which he received the Pius XI Medal in 1939, and was the recipient of two papal awards including the honorary title of Commander of the Knightly Order of the Holy Sepulcher in Jerusalem.