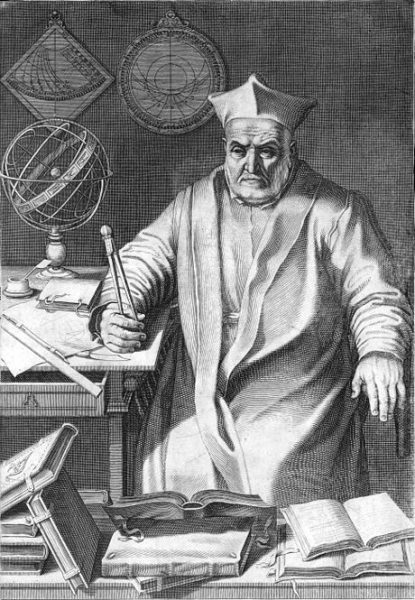 Christopher Clavius, S.J.  (March 25, 1538 to February 6, 1612) Clavius was  German Jesuit priest, astronomer and mathematician.  The Jesuit order was founded in 1540 and quickly became involved in scientific research.  Christopher Clavius joined the order in 1555 and in 1579 was commissioned by Pope Gregory XIII to oversee the reform of the calendar. The old Julian Calendar had been established by an edict of Julius Caesar in 45 BC.  Because the system of Julian years and leap years did not correspond exactly to the length of the astronomical year, dates of important Christian feasts had gotten out of alignment with the seasons. Clavius and his commission adopted the ideas for calendar reform of Aloysius Lillius, with some modifications, and in 1582 Pope Gregory XIII promulgated the new calendar. Catholic countries quickly adopted the “Gregorian calendar,” but Protestant and Eastern Orthodox countries were very slow to do so. For example, Britain did not adopt it until 1752 and Greece until 1923. The Gregorian Calendar is now in nearly universal use. Though Clavius made no important discoveries, he wrote widely used textbooks and worked successfully for the adoption of rigorous mathematical curricula in Jesuit colleges, at a time when the importance of mathematics in natural science (then called “natural philosophy”) was widely underappreciated, especially by Aristotelians.  The tradition of Jesuit astronomy and mathematics, which began with Clavius and continues to this day, includes such notable figures as Scheiner, Grimaldi, Riccioli, Saccheri, Boscović, and Secchi.  The Vatican Observatory is staffed by Jesuit scientists.  A short video about the Vatican Observatory can be found HERE.