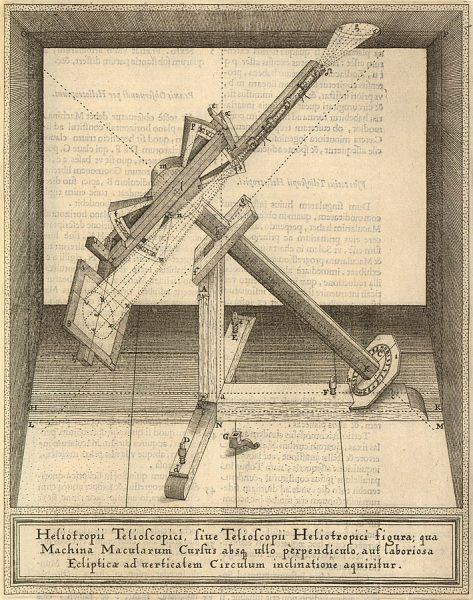 Christoph Scheiner, S.J.   (July 25, 1573 to June 18, 1650)  Scheiner was a German Jesuit priest and astronomer most famous for his studies of sunspots  Scheiner was one of five astronomers who discovered sunspots independently of each other and practically at the same time. (The others were Thomas Herriot, Johannes and David Fabricius, and Galileo.)  To be more precise, these men were the first to discover them with telescopes.  Sunspots were actually seen with the naked eye as early as 800 BC by Chinese astronomers and around 300 BC by the Greeks.  One was observed by the Benedictine monk Adelmus on March 17, 807, and the first drawing of a sunspot was by the English monk, John of Worcester, in 1128.  However, the scientific investigation of sunspots only began when they were rediscovered with telescopes in the 17th century.  Scheiner made the most sustained and systematic observations of them, published in his massive treatise, Rosa Ursina, in 1640.  Scheiner tracked sunspots as they moved across the face of the sun and showed from this data that the sun was rotating on an axis that is tilted with respect to the earth’s orbit. Scheiner’s extensive sunspot data is still of use to scientists today.  Scheiner was the first person to build a telescope with two convex lenses (a great improvement over existing telescopes that had been proposed but not actually built by Kepler) and used them for his observations. He performed several experiments on the physiology of the eye and showed that the retina is the seat of vision.