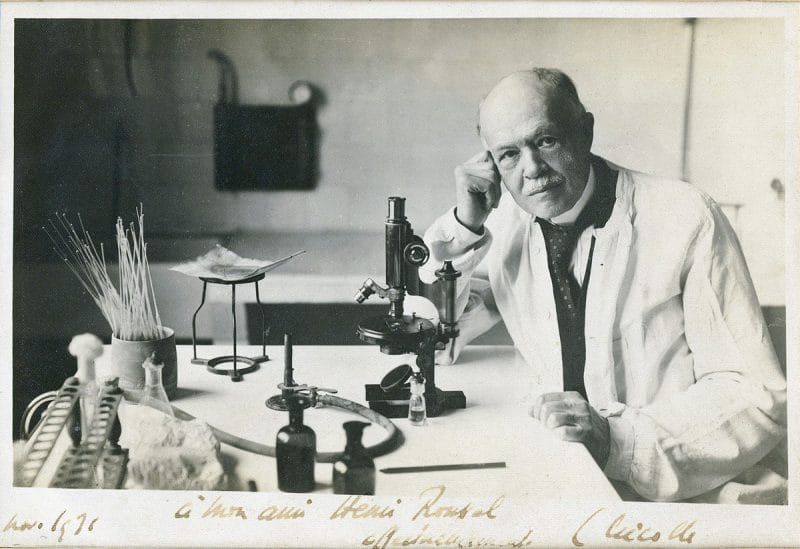 Charles Jules Henri Nicolle (September 21, 1866 to February 28, 1936)  Nicolle was a French bacteriologist, best known for discovering the means of transmission of typhus, for which he received the Nobel Prize in Medicine in 1928.  Nicolle was born in Rouen and after receiving his M.D. from the Pasteur Institute in Paris in 1893 returned to Rouen to take up a position on the faculty of the local medical school.  In 1903, he was appointed Director of the Pasteur Institute in Tunis, a position he held until his death.  Under his direction, this institute became a world-renowned center for bacteriological research.  Nicolle’s greatest discovery concerned the mechanism of transmission of typhus, a disease that often spread with extreme rapidity under conditions of war, hunger, and floods, and which has been responsible for the deaths of tens of millions of people. Soon after Nicolle’s arrival in Tunis, the local population was being decimated by a typhus epidemic.  Nicolle noticed that some of those who came into contact with the clothing of affected patients, such as laundry workers, were getting infected, whereas the patients themselves, after being washed and given clean hospital clothes, were no longer contagious. He inferred, and after experimentation on animals confirmed, that the disease was spread by body lice.  Nicolle also made many contributions to the study of other diseases, including Malta fever, tick fever, scarlet fever, measles, influenza, and tuberculosis.  More information about his research can be found in the official Nobel Prize biography of him.

Nicolle was raised in the Catholic faith by his mother, but lost his faith at the age of 12, becoming an atheist and remaining so until late in life. Starting in 1934, however, he felt spiritual anxiety and began a journey back to belief.  Important in this was his friendship with a Jesuit priest, Fr. Le Portois, with whom he had many clarifying conversations. He also exchanged hundreds of letters with a long-time Rouen friend, Edouard Delabarre, who urged him to open himself to grace and to whom he confided that he was waiting for a call from God that he had not yet received.  In time, he heard that call and reconciled with the Church on August 22, 1935.