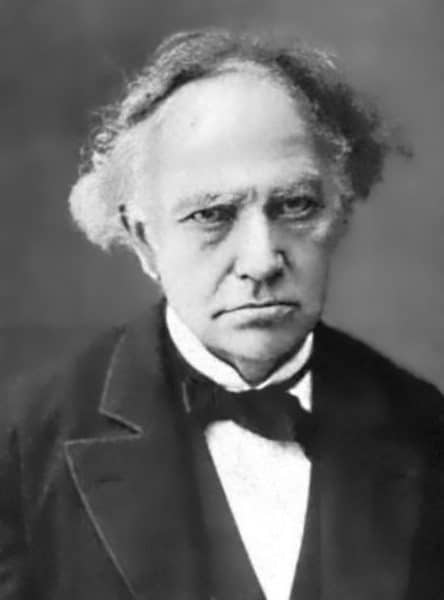 Charles Hermite  (December 24, 1822 to January 14, 1901)  Hermite was a French mathematician who made important contributions to several branches of mathematics, including number theory, elliptic functions, and orthogonal polynomials.  Much of his work has applications in modern physics.  For example, in quantum mechanics all “observables” (i.e. the properties of physical systems that are in principle measurable) correspond to “Hermitian operators” on a Hilbert space (the space of possible states of a system).  And the wave functions that describe the states of definite energy of a “harmonic oscillator” (a very basic kind of physical system) are expressed in terms of “Hermite polynomials.”  In pure mathematics, Hermite’s most famous achievement was to prove in 1873 that the number e (the base of the natural logarithms) is a “transcendental number,” i.e. a number that is not the root of a polynomial with integer coefficients. Among Hermite’s doctoral students were the renowned mathematicians Henri Poincaré, Thomas Stieltjes, and Henri Padé. Hermite was elected a member of the Académie des Sciences and a grand officer of the Légion d’honneur. In 1856, Hermite contracted smallpox. He was nursed back to health by a nun of the Sisters of Mercy. In the same year, and partly through the influence of the great mathematician Augustin-Louis Cauchy, he returned to the Catholic faith. In the words of the well-known mathematician Émile Borel, “Hermite was deeply attached to the Catholic faith; it was the stay and center of his life.”