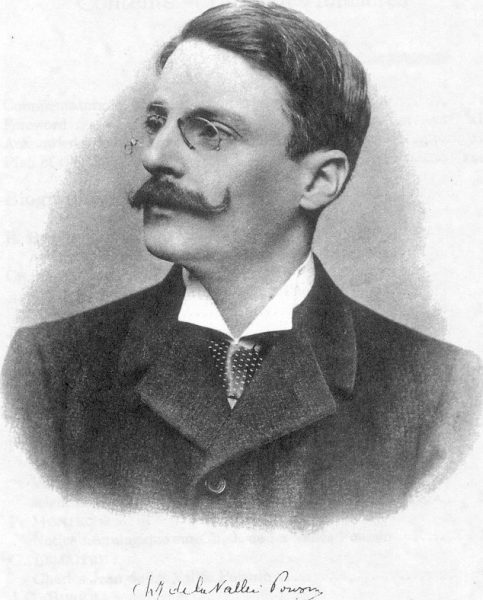 Charles Jean de la Vallée Poussin (August 14, 1866 to March 2, 1962).  De la Vallée Poussin was a Belgian mathematician, who did important work in the branches of mathematics called “number theory” and “analysis” and is most famous for proving the Prime Number Theorem. He studied mathematics at the Université Catholique de Louvain under his uncle Louis-Philippe Gilbert, who was professor of analysis there. At the age of 25, Charles himself became an assistant professor of mathematics at the same university, and shortly afterwards, upon the death of his uncle, was appointed to fill his position.  The textbooks de la Vallée Poussin wrote for his courses on mathematical analysis became widely used and influential.

De la Vallée Poussin’s greatest achievement in mathematics was his proof in 1896 of the Prime Number Theorem, which was also proved independently in the same year by the famous mathematician Jacques Hadamard.  Prime numbers play a central role in number theory.  (A prime number is a whole number that is not evenly divisible by any other whole number except 1.)  A basic question about prime numbers is how common they are, i.e. given some number N, how many prime numbers are there that are less than or equal to N?  The answer to this question is conventionally denoted by the expression π(N).  So, for example, π(20) = 8, because there are eight prime numbers that are less than or equal to 20 (namely 2, 3, 5, 7, 11, 13, 17, and 19).  For about a century, a number of famous mathematicians, including Gauss, Legendre, Dirichlet, Riemann, and Chebyshev had made progress on determining how π(N) depends on N when N is large.  But it was not until 1896 that de la Vallée Poussin and Hadamard independently proved that the answer is N/(ln N), where ln N is the natural logarithm of N.

Charles de la Vallée Poussin received many honors in his lifetime, including receiving the Poncelet Prize of the French Academy of Sciences in 1916 and being elected to be the first president of the International Mathematical Union in 1920.  He also has the distinction of having been the teacher of Georges Lemaître, the founder of the Big Bang theory of cosmology, who wrote his masters degree thesis under de la Vallée Poussin’s supervision.

De la Vallée Poussin was a devout Catholic. He played a leading role in the Sociêtê Scientifique de Bruxelles, an organization of Catholic scientists founded in 1875 and dedicated to showing the harmony of science and faith.  Between 1891 and 1959, Poussin published 58 of his 112 research papers in the Annals of that Society.  De la Vallée Poussin gave a speech at the inauguration of the Pontifical Academy of Sciences in 1937, which was reported at the time as follows in the Catholic press:

“Saying that the existence of God and the immortality of the soul are the basis of every moral law and social life,  Dr. Poussin declared that he who denies these truths constructs a most cruel doctrine forbidding men to raise their eyes to heaven. Catholic academicians, he added, could not have a greater honor than the opportunity to render the testimony of their Faith.  … Pointing to the assertion made by some that Faith and Science are mutually contradictory, Dr. Poussin said the history of science proves the contrary to be true. There is no possibility of a contradiction between real Science and Faith, because God is the source of both and God cannot contradict himself, … .  There are others who claim that the Catholic scientist is chained by dogmas and cannot freely seek the truth, he said. This is false, he added, because the Catholic scientist does not fear the truth, but contemplates it, repeating the words of Kepler, who thanked God for the joys granted him in the contemplation of His works. … In fact, Dr. Poussin continued, science is enslaved where God is proscribed.”