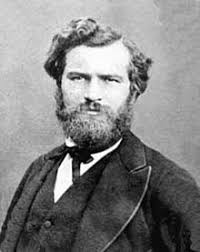 Marie Ennemond Camille Jordan (January 5, 1838 to January 22, 1922)  Camille Jordan made important contributions to many branches of mathematics and is considered one of the leading mathematicians of the late 19th century.  After studying mathematics at the École Polytechnique, he entered upon a career as an engineer (as was common among French mathematicians of that era).  Later in his life he taught at the École Polytechnique and at the Collège de France.  His multivolume textbook Cours d’analyse de l’Ecole Polytechnique had great influence in the mathematical world.  Jordan helped lay the foundations of the branch of mathematics that is now called “group theory.”  Group theory, which is the study of symmetries, is very important in many areas of modern physics and centrally so in fundamental physics. For example, the very existence of the four known fundamental forces and the “conservation laws” associated with them (such as conservation of energy-momentum and of electric charge) are the consequence of symmetries of the equations of physics.  Jordan was the first person to develop a systematic approach to the study of so-called “finite groups,” important examples of which are “permutation groups” and the groups that describe the symmetries of crystals, both areas where Jordan did pioneering work.  Because of his reputation, in 1870 the great mathematicians Felix Klein and Sophus Lie (then still early in their careers) came to Paris study with him, though they soon had to leave because of the outbreak of the Franco-Prussian War. Klein and Lie went on to developed group theory much further, partly building on Jordan’s work.  Also in 1870, Jordan published his Traité des substitutions et des équations algebraique (“Treatise on permutations and algebraic equations”), which was the first book ever written on group theory.  Jordan also did pioneering work in the branches of mathematics called linear algebra (which is very important in theoretical physics), mathematical analysis, and topology.  In topology, he introduced the important concept of “homotopy” (which also has found important applications in physics).  Jordan was the first to prove what is now called the Jordan Theorem, which says that a closed curve drawn on a plane divides the plane into two areas.  (Though intuitively obvious, the theorem is surprisingly difficult to prove rigorously.)

Jordan received many honors in his lifetime.  In 1870, he received the Prix Poncelet of the Académie des sciences and was elected to the Académie himself in 1881.  In 1890, he was inducted into the Légion d’Honneur. He was named the Honorary President of the International Congress of Mathematicians at Strasbourg in September 1920.  From 1885 until his death, he was the editor of the Journal de Mathématiques Pure et Appliquées, a leading research journal of mathematics.

Jordan was a member of the Société scientifique de Bruxelles, an organization of Catholic scientists founded in 1875, whose motto was “Nulla unquam inter fidem et rationem vera dissensio esse potest” (“a true dispute between faith and reason is never possible”).  In a eulogy for Jordan, the president of the Académie des sciences, Emile Bertin, said,

“Jordan was an honest man, a great honest man in all the meanings of the word. He continued in Paris, in the same district of Paris, the tradition of Christian philosophers and thinkers, to whom was due the revival of Parisian Catholicism in the beginning of the last century.”