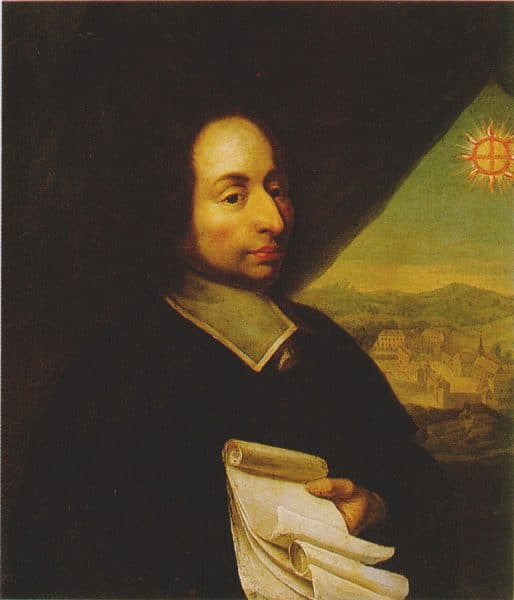 Blaise Pascal  (June 19, 1623 to August 19, 1662)  Pascal was one of the most remarkable figures of the Scientific Revolution. Though he lived to be only 39 years old, he left his mark in many diverse fields.  His mathematical genius manifested itself early: at the age of sixteen he discovered a beautiful theorem in “projective geometry” that became famous as “Pascal’s Theorem.”  At the age of nineteen he devised and built the first calculating machine, in honor of which a widely used computer programming language is named PASCAL. Blaise Pascal and Pierre de Fermat are considered to be the founders of probability theory, as some of the basic ideas of that field were developed in an extended correspondence between them in 1654 about games of chance.  In physics, Pascal is most famous for his work on the pressure of fluids. Pascal’s Principle in hydrostatics (which underlies hydraulic presses and other hydraulic devices) states that a change in pressure at any point in an enclosed incompressible fluid is transmitted undiminished to all points in the fluid.  Among other things, this principle allows one to calculate how fluid pressure depends on height. Based on his research, Pascal realized that atmospheric pressure must decrease with altitude. In 1648, upon hearing of Torricelli’s invention of the barometer, Pascal had a mercury barometer carried up the 1,500-meter Puy de Dôme mountain near his home. As expected, the atmospheric pressure was measurably lower at the top.  In honor of his work in this area, the Standard International unit of pressure is named the Pascal.  On November 23, 1654, late in the evening, Pascal had an intense mystical experience or vision, which profoundly affected him.  He thereafter devoted increased attention to religious subjects.  In 1656-7, he published a famous series of 18 letters, called the Lettres Provinciales (Provincial Letters), attacking the ethical theories of the Jesuits, which he regarded as lax.  Near the end of his life, Pascal set out to write a treatise that was to be called “Defense of the Christian Religion.”  He died in the middle of the project, however, leaving only numerous fragments of its text, which were published posthumously under the title Pensées (“Thoughts”). Despite its unfinished state, it is regarded as a philosophical and spiritual masterpiece as well as a masterpiece of French literary style. In one of its most famous passages, Pascal proposed the famous and much discussed “Pascal’s wager” as an argument against radical skepticism.