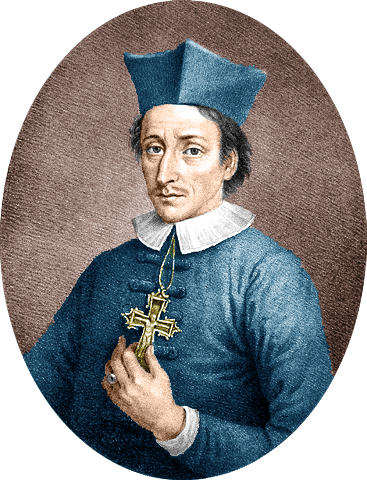 Bl. Nicolas Steno  (Januar 11, 1638 to December 5, 1686  Gregorian Calendar)  Steno  made fundamental contributions to four branches of science: anatomy, paleontology, geology, and crystallography. He was Danish by birth (Nicolas Steno is a Latinized version of Niels Stenson). While still in his twenties he was already recognized as one of the leading anatomists in Europe.  His anatomical studies greatly increased knowledge of the glandular-lymphatic system.  Various parts of the body are named after him, including Stensen’s duct, Stensen’s gland, Stensen’s vein, and Stensen’s foramina.  He also did important work on heart and muscle structure, brain anatomy, and embryology.  He traveled to Florence, where he worked in a research institute that included some of Galileo’s pupils. In 1666, while dissecting the head of a Great White shark that had been caught near Livorno, he noticed that the shark’s teeth strongly resembled the so-called tongue-stones common on Malta.  This led him to develop, after much geological investigation, a detailed theory of the origin of fossils and of sedimentary rock that was controversial but correct.  Steno’s theory of sedimentary rock was based on three ideas: the “law of superposition”, the “principle of original horizontality”, and the “principle of lateral continuity,” which are now recognized as the fundamental principles of stratigraphy. Steno is thus regarded as the founder of the study of fossils and a one of the main founders of the science of geology. Steno’s theory of how geological strata were laid down opened the way to understanding the history and age of the earth. The study of geology led Steno to the study of crystals, where he discovered the basic fact, known as Steno’s Law, that in all crystals of the same mineral the angles are the same. Steno was raised as a Lutheran, but a deep study of theology and the writings of the early Church Fathers led him to embrace Catholicism.  He became a priest and soon afterward a bishop.  In his last public lecture as a scientist, he made this statement: “Beautiful is what we see. More beautiful is what we comprehend. Most beautiful is what we do not comprehend.” As bishop, he was known as an ardent advocate for the poor, for whom he sold all of his belongings, even his bishop’s ring. He practiced rigorous asceticism, constantly praying and fasting.  On October 23, 1988, he was beatified by Pope John Paul II.  His feast day is Dec 5.