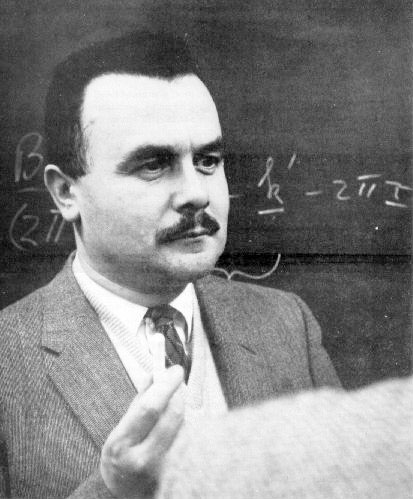 Bertram N. Brockhouse (July 15, 1918 to October 13, 2003) Brockhouse was a Canadian physicist who won the Nobel Prize in Physics in 1994 “for pioneering contributions to the development of neutron scattering techniques [and] the development of neutron spectroscopy.”  Brockhouse was born in a small town in Alberta, Canada. After serving six years in the Royal Canadian Navy during World War II, he entered the University of British Columbia, receiving his bachelors degree in physics and mathematics in 1947. He went on to receive his PhD in physics from University of Toronto in 1950. From 1950 until 1962, he did research at Canada’s Chalk River Nuclear Laboratory, where he did much of his groundbreaking work.  From 1962 until his retirement, he was a professor of physics at McMaster University.

Nuclear spectroscopy uses beams of neutrons to probe the structure of matter.  One reason neutrons are useful for this is that they are electrically neutral and can therefore penetrate into materials, rather than being reflected or absorbed at their surface.  Another reason is that neutrons emitted by nuclear reactors (such as the one at Chalk River) or by other sources can be slowed down (or “cooled”) so that their “wavelengths” become similar to the typical spacing between atoms in solids and liquids. (Quantum mechanics tells us that neutrons and other particles act like waves.)  Having such wavelengths means that the neutrons are not merely reflected by matter but are “diffracted” by it. (Diffraction is a very important wave phenomenon first discovered — in light — by the 17th century Jesuit scientist Francesco Grimaldi.) The first neutron diffraction experiments were carried out by Ernest O. Wollan and Clifford Shull in 1945, and these techniques were developed further and in new directions by Brockhouse.  (Shull shared in the 1994 Nobel Prize with Brockhouse, but Wollan had died in 1984.)

Two of Brockhouse’s many contributions were the development of “inelastic neutron scattering” techniques and “triple-axis spectrometry.”  These allow the study not only of the positions of the atoms in matter, but their movement and dynamics as well.  The press release announcing his Nobel Prize in 1994, said,

“During a hectic period between 1955 and 1960 Brockhouse’s pioneering work was without parallel within neutron spectroscopy. This enabled the technique to develop [in many ways as a] unique source of information which has revolutionised our ability to chart atomic dynamics, e.g. atomic vibrations in crystals, diffusion movements in liquids and fluctuations in magnetic material. Such information is contributing actively to the elucidation of the forces that bind atoms to one another in solid bodies and that determine, for instance, the transition from the solid state to the fluid state.”  https://www.nobelprize.org/prizes/physics/1994/press-release/

Bertram Brockhouse was an agnostic as a youth, later became an Anglican, and after a long process of conversion entered the Catholic Church.  One of his six children, Charles Brockhouse, became a scientist himself and wrote an interesting essay in the Journal of Religion and Society entitled “A Biologist’s Perspective on Science and the Catholic Intellectual Tradition,” in which he refers to his father’s spiritual journey to the Catholic Faith.  (See https://dspace2.creighton.edu/xmlui/bitstream/handle/10504/64655/2011-13.pdf?sequence=1&isAllowed=y)