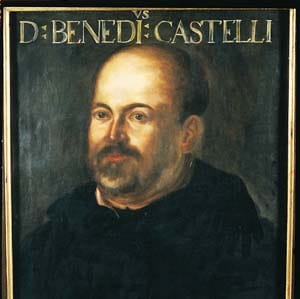 Benedetto Castelli, O.S.B.  (1578 to April 9, 1643) Castelli was a priest of the Benedictine order.  He was a student of Galileo and defended Galileo and Copernicanism throughout Galileo’s troubles with Church authorities.  When Galileo decided to defend himself publicly against some of his accusers, he chose to do so by means of an open letter addressed to Castelli, which is now famous. At Galileo’s recommendation, Castelli was made professor of mathematics at the University of Pisa in 1613. There he began to study water in motion.  In 1628, he published his magnum opus, On the Measurement of Water Currents, which is considered the beginning of modern hydraulics.  By this time, Castelli had been called to Rome by Pope Urban VIII to be a consultant on hydraulics and a professor at the University of Rome.  There he taught his famous student Evangelista Torricelli, who carried Castelli’s work on fluid motion much further.  Torricelli was the first person to create a sustained vacuum and to discover the principle of the barometer.  Torricelli also made substantial contributions to mathematics, along with another famous pupil of Castelli, a priest named Bonaventura Cavalieri.

Copyright information on the Picture of Benedetto Castelli