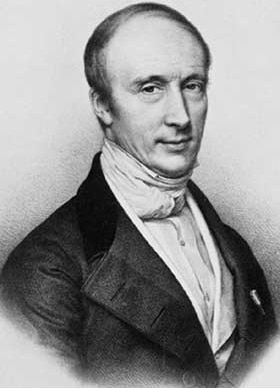 Augustin-Louis Cauchy (August 21, 1789 to May 23, 1857) Cauchy is regarded as one of the greatest and most influential mathematicians in history. He was also one of the most prolific, having written about 800 research papers. He almost single-handedly founded the theory of functions of a complex variable, which has extensive applications in physics. He also helped put mathematical analysis (basically, the study of continuous quantities) on a rigorous foundation.  In the words of the mathematician Hans Freudenthal, “More concepts and theorems have been named for Cauchy than for any other mathematician…”  A very long, but partial list is given here: https://en.wikipedia.org/wiki/List_of_things_named_after_Augustin-Louis_Cauchy   In addition to his work in pure mathematics, Cauchy worked extensively in mathematical physics, including the theory of light waves, elasticity, and mechanics.

Cauchy was known for his piety and strong Catholic convictions. It was partly through his influence that the famous mathematician Charles Hermite returned to the faith.  Cauchy was also known for his many deeds on behalf of individuals in need and in support of charitable institutions.  He was a member of the Society of St. Vincent de Paul.  Living in a time when there were many attacks on the Catholic religion, Cauchy was always quick to rise to its defense.  In a pamphlet he published in defense of Jesuit schools that were being attacked by antireligious zealots, Cauchy made this declaration:

“I am a Christian, that is to say, I believe in the divinity of Jesus Christ as did Tycho Brahe, Copernicus, Descartes, Newton, Fermat, Leibniz, Pascal, Grimaldi, Euler, Guldin, Boscovich, Gerdil; as did all the great astronomers, physicists, and geometricians of past ages: nay more I am like the greater part of these a Catholic: and were I asked for the reasons of my faith I would willingly give them. I would show that my convictions have their source not in mere prejudice but in reason and a resolute enquiry.”