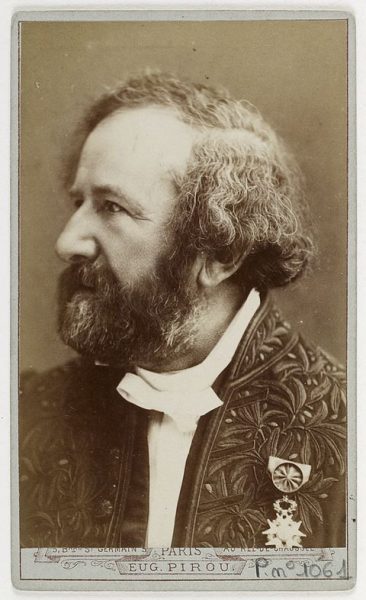 Armand Hippolyte Louis Fizeau (September 23, 1819  to September 18, 1896) Fizeau was a French physicist, most famous for his measurement of the speed of light and for the “Fizeau experiment” which had important implications for aether theories of light and special relativity.  In 1849, Fizeau made the first accurate direct measurement of the speed of light, obtaining a result that was only 5% from the true value. He did this by reflecting a beam of light from a mirror 8 km away and observing it through a rapidly rotating toothed wheel whose speed of rotation was adjusted so that the outgoing light went through one gap in the wheel and the returning light went though the next gap. Even more important was the famous “Fizeau experiment,” in which he measured the speed of light that traveled through water that was moving with respect to the laboratory in the same direction. He found that the speed of light was not simply the sum of the speed of water (v) and the speed of light in stationary water (c/n, where n is the index of refraction of water). Rather he found that it was   c/n + v(1- n -2).  This disagreed with the most widely accepted “aether theories” of light (though it agreed with one that had been proposed by Fresnel).  This discovery influenced Einstein in developing his theory of special relativity, which predicts a velocity of light in a moving medium that agrees with Fizeau’s formula when v is small compared to c (which, of course, it was in Fizeau’s experiment).  Fizeau’s friend, the physicist Alfred Cornu, wrote that Fizeau was openly and all his life a “convinced and practicing” Catholic. In one speech, Fizeau said, in clear reference to materialism,

“Science, anxious above all to retain her dignity and independence, wisely refuses to ally herself to philosophic systems … which might come to dominate her. … and on her part … does not intrude inopportunely on philosophical or social questions, nor set herself in hostility to the noble promptings of the heart or the pure voice of conscience.”