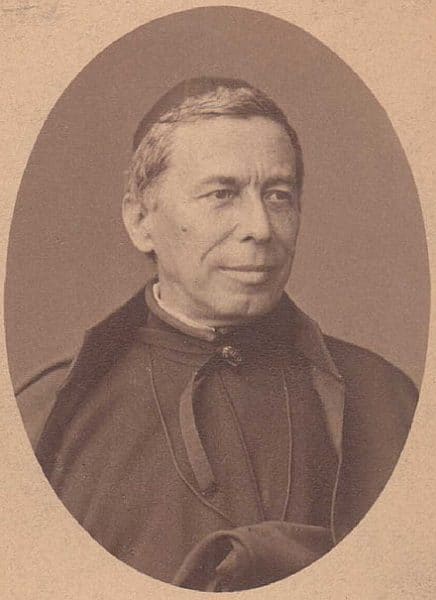 Angelo Secchi, S.J. (June 28, 1818 to February 28, 1878) The Italian priest Angelo Secchi continued the great tradition of Jesuit science into the nineteenth century and is considered one of the founders of modern astrophysics.  Since antiquity, astronomy concerned itself with the positions and motions of celestial bodies. Astrophysics goes beyond that to questions of what these bodies are made of, how they produce their light, how they form and evolve, and so on.  The first information about such questions came through studying the spectra of light emitted by the Sun and stars. Secchi was a pioneer in the study and classification of stars using spectroscopy.  He made the first spectroscopic classification of stars, which remained the standard one until an improved version was developed at Harvard University in the early twentieth century.  He made many other contributions to astronomy, as well as to meteorology and oceanography. In 1856 he was elected a member of the Royal Society of London; in 1857 of the Académie des Sciences of Paris; and in 1853, of the Pontificia Accademia dei Nuovi Lincei of which he became president. Perhaps nothing so dramatizes the positive relation of faith and science as the fact that Secchi did much of his groundbreaking research using a telescope that he had built on the roof of the Church of Sant’Ignazio (Saint Ignatius), one of the most beautiful churches in the city of Rome, right above the sacred space where he and his fellow Jesuits daily celebrated Mass.  Fr. Secchi wrote that “The contemplation of God’s works is one of the noblest works of the spirit; this is the principal aim of the study of nature.”

An interesting video about Fr. Secchi can be found here: https://www.catholicscientists.org/idea/fr-angelo-secchi-s-j-jesuit-astrophysicist-2