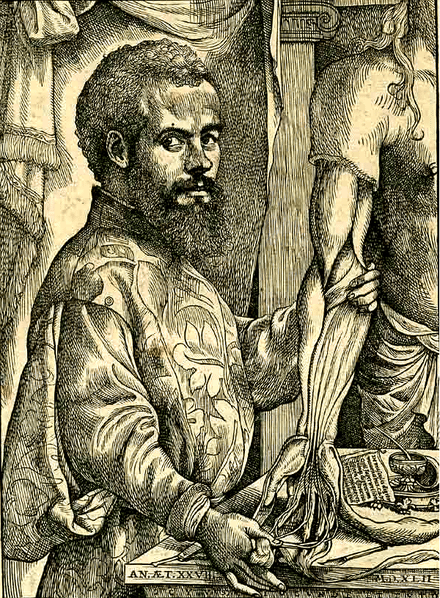 Andreas Vesalius (this is a Latinized form of the Flemish name Andries van Wesel) (December 31, 1514 to October 15, 1564) The Flemish anatomist Vesalius is often called the founder of modern human anatomy.  Since antiquity, the scientific prestige of Galen, the 2nd century Greek anatomist and physician, had been so great that many of his statements were accepted without question. Vesalius demonstrated that there were numerous errors in Galen’s descriptions of human anatomy. (This was due, as Vesalius learned, to the fact that Galen had based his conclusions on studying Barbary macaque apes, because human dissection was banned in ancient Rome.) Human dissection was practiced by medical researchers in Europe, especially Italy, since 1300 (contrary to the anti-Catholic myth that it was forbidden by the Church). However, these dissections were often carried out by barber-surgeons who acted as assistants to medical teachers. Vesalius, by contrast, carried out his own dissections of human cadavers and encouraged his students to do the same. His hands-on approach and careful observation enabled him to make many anatomical discoveries. In 1543, he published his epoch-making multi-volume work, “De humani corporis fabrica” (“On the fabric of the human body”), which was filled with richly detailed illustrations of every part of the human body that were far superior to those of earlier books. This work is regarded as a major advance in the history of anatomy. In 1564, as he was returning from a pilgrimage to the Holy Land, Vesalius was shipwrecked in the Aegean island of Zakynthos, where he died soon after.