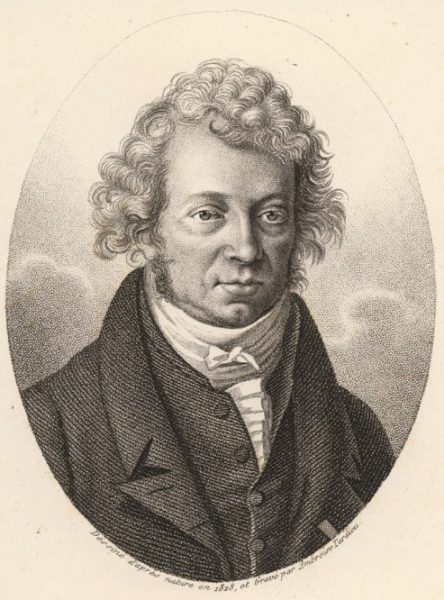 André-Marie Ampère  (January 20, 1775 to June 10, 1836)  Ampère is one of the principal architects of the theory of electromagnetism.  He was the son of a prosperous businessman who was called into government service during the French Revolution but guillotined in 1993 after the Jacobin faction took power.  Ampère married in 1799, but was widowed after only a few years and moved with his infant son to Paris to take a position at the École Polytechnique, eventually becoming a professor of mathematics there.  In 1820, After learning of the accidental discovery by Hans Christian Oersted that an electrical current in a wire can cause a nearby compass needle to move, Ampère began a series of experimental researches that culminated in his discovery, in 1823, of what is now known as Ampère’s Law.  This mathematical law describes the magnetic force between two pieces of wire that are carrying electrical current.  This is the fundamental force law for magnetostatics, analogous to (though more mathematically complicated than) Coulomb’s Law in electrostatics.  In honor of this epoch-making discovery, the most commonly used unit of electrical current is called the ampere (or “amp” for short).

Ampère was a sincere and devout Catholic believer. He was a mentor of Bl. Frédéric Ozanam, the main founder of the Society of St. Vincent de Paul, who stayed with the Ampère family for a period. The Catholic Encyclopedia relates the following:

“On the day of his wife’s death he wrote two verses from the Psalms, and the prayer ‘O Lord, God of Mercy, unite me in heaven with those whom you have permitted me to love on earth.’ Serious doubts harassed him at times and made him very unhappy. Then he would take refuge in the reading of the Bible and the Fathers of the Church. ‘Doubt,’ he says in a letter to a friend, ‘is the greatest torment that a man suffers on earth.’”

According to Charles Augustin Sainte-Beuve, the French writer, historian, and younger contemporary of Ampère, Ampère’s doubts subsided over time and he attained in his own mind “an alliance of faith and science, of belief and hope in human thought and adoration before the Revealed Word.”  In his Essai sur la philosophie des sciences (Essay on the philosophy of science), Ampère wrote,